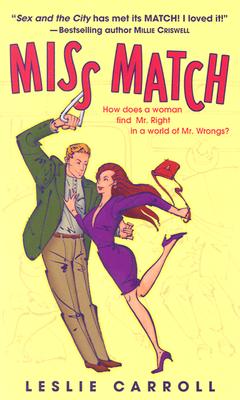 For drama teacher Kathryn Lamb, being thirty-five and single means an endless run on the dating wheel. Everyone from her happily married sister to her meddling neighbor thinks it’s time for Kitty to take drastic action to find herself a wonderful man. So she enrolls in New York’s premier matchmaking service, which guarantees five potential mates or her money back. And if Walker Hart, the gorgeous entrepreneur of the company, is any example of the men who will be parading to her apartment, then Kitty will definitely be a satisfied customer.

But as each promising encounter turns into a disaster, Kitty realizes that the only guy who has captured her romantic heart is the one who doesn’t believe in happily ever after. Sexy and sassy, Miss Match is a hilarious first novel that delves into the anxieties of the mating game, where every now and then one has to bend the rules. . . .

Native New Yorker Leslie Carroll is a professional actress as well as a novelist. She has appeared on stage, in short films, daytime dramas, and commercials, and has done voiceovers and talking books. Leslie also writes historical and New York noir detective fiction, and is the author of three stage adaptations of 19th century/early 20th century English novels: Ivanhoe, The Prisoner of Zenda, and The Scarlet Pimpernel. Additionally, she is the dramatist of The Diaries of Adam and Eve, based upon the humorous writing of Mark Twain. Leslie is a member of the Dramatists’ Guild, both the national and New York chapters of Romance Writers of America, and is a third-generation member of The Players, the country’s oldest and most prestigious theatrical and literary social club. She is a graduate of the Fieldston School in Riverdale and received her bachelor of arts from Cornell University.
Loading...
or
Not Currently Available for Direct Purchase