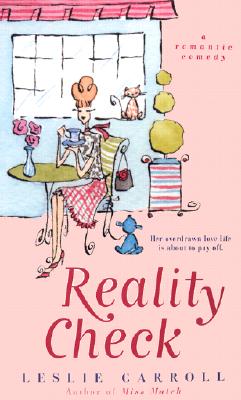 IF LIZ CAN’T FIND “THE ONE”
SHE’LL TAKE THE MILLION.

Liz Pemberley is a smart girl with a weakness for bad boys, but for the first time in her life, her bad luck with men might just pay off. A hot new reality TV show called Bad Date is offering a million dollars to the singleton with the best story of romance gone awry. There’s no one with a more dismal dating history than Liz and she intends to prove it . . . on national television.

Once she gets on the show, the unimaginable happens–she meets a really nice guy. And not only is Jack Rafferty nice, he’s also, sexy, sweet, and ready to settle down. But as contestants on Bad Date, they’ve signed a contract that makes fraternizing with each other a major no-no. What’s a girl to do? Of course she wants to win the prize money, but Jack is too good to resist. With her fate on the show hanging in the balance, Liz will risk it all for the one thing she has always wanted–the perfect man!

“Funny, yet filled with cutting-edge wit, irony, and human foibles, Reality Check is a truly modern courtship tale. Definitely an author on the rise!”
–Romantic Times

Native New Yorker Leslie Carroll is a professional actress as well as a novelist. She has appeared on stage, in short films, daytime dramas, and commercials, and has done voiceovers and talking books. She is the author of Miss Match. Leslie also writes historical and New York noir detective fiction, and is the author of three stage adaptations of nineteenth century/early twentieth century English novels: Ivanhoe, The Prisoner of Zenda, and The Scarlet Pimpernel. Additionally, she is the dramatist of The Diaries of Adam and Eve, based upon the humorous writing of Mark Twain. Leslie is a member of the Dramatists Guild, both the national and New York chapters of Romance Writers of America, and is a third-generation member of The Players, the country’s oldest and most prestigious theatrical and literary social club. She is a graduate of the Fieldston School in Riverdale and received her bachelor of arts from Cornell University.
Loading...
or
Not Currently Available for Direct Purchase