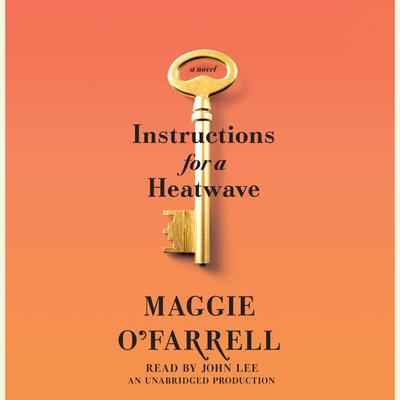 Instructions for a Heatwave (Digital Audiobook)

Sophisticated, intelligent, impossible to put down, Maggie O’Farrell’s beguiling novels—After You’d Gone, winner of a Betty Trask Award; The Distance Between Us, winner of a Somerset Maugham Award; The Hand That First Held Mine, winner of the Costa Novel Award; and her unforgettable bestseller The Vanishing Act of Esme Lennox—blend richly textured psychological drama with page-turning suspense. Instructions for a Heatwave finds her at the top of her game, with a novel about a family crisis set during the legendary British heatwave of 1976.

Gretta Riordan wakes on a stultifying July morning to find that her husband of forty years has gone to get the paper and vanished, cleaning out his bank account along the way. Gretta’s three grown children converge on their parents’ home for the first time in years: Michael Francis, a history teacher whose marriage is failing; Monica, with two stepdaughters who despise her and a blighted past that has driven away the younger sister she once adored; and Aoife, the youngest, now living in Manhattan, a smart, immensely resourceful young woman who has arranged her entire life to conceal a devastating secret.

Maggie O’Farrell writes with exceptional grace and sensitivity about marriage, about the mysteries that inhere within families, and the fault lines over which we build our lives—the secrets we hide from the people who know and love us best. In a novel that stretches from the heart of London to New York City’s Upper West Side to a remote village on the coast of Ireland, O’Farrell paints a bracing portrait of a family falling apart and coming together with hard-won, life-changing truths about who they really are.

Born in Northern Ireland in 1972, Maggie O'Farrell grew up in Wales and Scotland and now lives in London. She has worked as a waitress, chambermaid, bike messenger, teacher, arts administrator, and journalist in Hong Kong and London, and as the deputy literary editor of The Independent on Sunday. Her debut novel, After You'd Gone (2000), won a Betty Trask Award and was followed by My Lover's Lover (2002); The Distance Between Us (2004), winner of a Somerset Maugham Award; The Vanishing Act of Esme Lennox (2006); and The Hand That First Held Mine (2010), winner of the Costa Book Award.