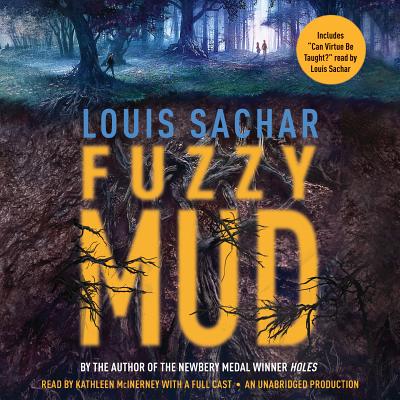 From the author of the acclaimed bestseller Holes, winner of the Newbery Award and the National Book Award, comes a new middle-grade novel with universal appeal. Combining horror-movie suspense with the issues of friendship, bullying, and the possibility of ecological disaster, this novel will intrigue, surprise, and inspire readers and compel them to think twice about how they treat others as well as their environment.

Be careful. Your next step may be your last.

Fifth grader Tamaya Dhilwaddi and seventh grader Marshall Walsh have been walking to and from Woodridge Academy together since elementary school. But their routine is disrupted when bully Chad Hilligas challenges Marshall to a fight. To avoid the conflict, Marshall takes a shortcut home through the off-limits woods. Tamaya, unaware of the reason for the detour, reluctantly follows. They soon get lost. And then they find trouble. Bigger trouble than anyone could ever have imagined.

In the days and weeks that follow, the authorities and the U.S. Senate become involved, and what they uncover might affect the future of the world.


"Grounded in well-rounded central characters, this compelling novel holds as much suspense as fuel for discussion.”—Booklist, Starred

"Fast-paced. An exciting story of school life, and bullies that becomes a quick meditation on the promise and dangers of modern science."—Kirkus Reviews

"This engaging eco-cautionary tale... will captivate readers while giving them plenty to think about."—School Library Journal

"An engrossing plot . . .a most entertaining ride . . . .Readers will devour this delightful book just as they did with HOLES. A unique story that keeps readers on their toes."—VOYA

"Sachar is a master at compact and unintimidating plotting; the school story unfolds with swift authenticity in its own right and then becomes tautly suspenseful."—The Bulletin of the Center for Children's Books

LOUIS SACHAR is the author of the #1 New York Times bestseller Holes, which won the Newbery Medal, the National Book Award, and the Christopher Award, as well as Stanley Yelnats’ Survival Guide to Camp Green Lake; Small Steps, winner of the Schneider Family Book Award; and The Cardturner, a Publishers Weekly Best Book, a Parents’ Choice Gold Award recipient, and an ALA-YALSA Best Fiction for Young Adults Book. His books for younger readers include There’s a Boy in the Girls’ Bathroom, The Boy Who Lost His Face, Dogs Don’t Tell Jokes, and the Marvin Redpost series, among many others.
Loading...
or
Not Currently Available for Direct Purchase