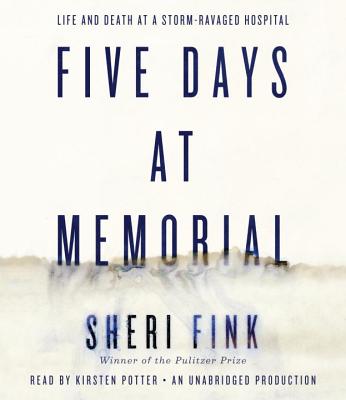 An ALA Notable Book, finalist for the NYPL 2014 Helen Bernstein Award, shortlisted for the PEN/E.O. Wilson Award and the ALA Andrew Carnegie Medal An NPR "Great Reads" Book, a Chicago Tribune Best Book, a Seattle Times Best Book, a Time Magazine Best Book, Entertainment Weekly's #1 Nonfiction Book, a Christian Science Monitor Best Book, and a Kansas City Star Best Book Pulitzer Prize winner Sheri Fink's landmark investigation of patient deaths at a New Orleans hospital ravaged by Hurricane Katrina - and her suspenseful portrayal of the quest for truth and justice. In the tradition of the best investigative journalism, physician and reporter Sheri Fink reconstructs 5 days at Memorial Medical Center and draws the reader into the lives of those who struggled mightily to survive and to maintain life amid chaos.

After Katrina struck and the floodwaters rose, the power failed, and the heat climbed, exhausted caregivers chose to designate certain patients last for rescue. Months later, several health professionals faced criminal allegations that they deliberately injected numerous patients with drugs to hasten their deaths. Five Days at Memorial, the culmination of six years of reporting, unspools the mystery of what happened in those days, bringing the reader into a hospital fighting for its life and into a conversation about the most terrifying form of health care rationing. In a voice at once involving and fair, masterful and intimate, Fink exposes the hidden dilemmas of end-of-life care and reveals just how ill-prepared we are in America for the impact of large-scale disasters--and how we can do better. A remarkable book, engrossing from start to finish, Five Days at Memorial radically transforms your understanding of human nature in crisis.


Praise For Five Days at Memorial: Life and Death in a Storm-Ravaged Hospital…


One of USA Today's "Coolest Books" for Fall

One of People magazine's "Great Reads" in New Nonfiction

"What we have here is masterly reporting and the glow of fine writing.” – Sherwin B. Nuland, New York Times Book Review

“Dr. Fink more than delivers. She writes with a seasoned sense of how doctors and nurses improvise in emergencies, and about the ethical realms in which they work. The first half of this book, which is well paced, covers the five days of the title. Then the viewfinder shifts to an entwined legal and political story in which state authorities pursue a homicide investigation. That so many people, starkly divided over the question of whether crimes had been committed, come off as decent and appealing makes this book an absorbing read. Dr. Fink brings a shimmering intelligence to its many narrative cul-de-sacs, which consider medical, legal and ethical issues…. By reporting the depth of those gruesome hours in Memorial before the helicopters came, and giving weight to medical ethics as grounded in the law, Sheri Fink has written an unforgettable story. Five Days at Memorial is social reporting of the first rank.”– Jason Berry, New York Times

“The journalist and doctor Sheri Fink published a meticulous investigation of these deaths in the New York Times Magazine and on the Web site of ProPublica, in 2009. Her work won a Pulitzer Prize.  And now comes the book. In “Five Days at Memorial,” the contours of the story remain the same, yet Fink imbues them with far more narrative richness, making the doctors seem both more sympathetic and more culpable. Fink also expands on the ethical conundrums, which have festered over time and seem to gain fresh urgency.”—TheNewYorker.com

"A triumph of journalism...Fink re-creates this world with mastery and sensitivity, revealing the full humanity of each character. Unlike post-storm commentary that jumped to black and white conclusions, painting the doctors as heroes or villains, Fink’s narrative wades through the muck and finds only real people making tough choices under circumstances the rest of us, if we’re lucky, will never experience." – Houston Chronicle

"Every page gives evidence of meticulous research, thousands of hours spent interviewing, prowling the halls at Memorial, reviewing legal documents and transcripts...[Fink] offers no easy answers, no rush to judgment. But she does deliver an amazing tale, as inexorable as a Greek tragedy and as gripping as a whodunit."– Dallas Morning News

"Fink has done a masterful reporting job, and Five Days at Memorial is often engrossing, particularly those pages that take readers inside the hospital...Fink’s book is essential reading for anyone who cares about New Orleans, the breakdown of order in disaster zones, and medical dilemmas under crisis circumstances." - Boston Globe

"Fink, a Pulitzer Prize-winning journalist who trained as a physician, writes powerfully of the investigation into the Memorial deaths and, in her epilogue, of subsequent disasters: the earthquake in Haiti, Hurricane Sandy in the Northeast, an influenza pandemic in India.” – Radhika Jones, TIME

“Powerful…Fink, a trained physician turned journalist, is able to re-create in minute detail the sights, smells and sounds of Memorial in the days following the storm. It’s safe to say that her medical background gave her a unique perspective, which, coupled with her fine writing, offers the reader an evocative narrative of how the hospital staff and patients struggled to cope with the lack of electricity, climbing temperatures, and a sense that they might not make it out alive.” — USA Today

“This isn’t just a policy brief ornamented with characters. It is, like all great journalism, a document unto itself, an artifact of what we thought about ‘life and death’ issues in the early twenty-first century… Magnificent.” – Bookforum

“An important book… Fink, an M.D. and Pulitzer-winning journalist, certainly knows how to craft a nonfiction page-turner.” – Laura Miller, Salon

“[Fink] has shaped her research into an elegant narrative, Five Days at Memorial, with all the page-turning pull of a novel, no easy feat given the complexity of the story… riveting." – Entertainment Weekly

“Pulitzer Prize-winning journalist Sheri Fink spells out the story of Memorial – and its consequences – in a book that is as excellent as it is alarming.” – Christian Science Monitor

"Fink’s descriptions of the flooded hospital, her extensive interviews with those who were there, profiles of investigators and study of the history and ethics of triage and euthanasia come very close to a full airing of how a disaster can upset society’s usual ethical codes, and how that played out at New Orleans’ Memorial Medical Center....Fink has written a compelling and revealing account."– Seattle Times

"Five Days At Memorial unfolds in two parts—an impeccably researched reconstruction of the events inside the hospital during the disaster, and a gripping account of the investigation and trial that followed. Pulitzer-Prize-winning Sheri Fink, who is also a physician and a former relief worker in combat zones, lays out every shred of evidence, but leaves the final judgment to the reader. Five Days at Memorial treats the chain of events at the hospital as a microcosm that raises vital and increasingly relevant questions about end-of-life care, and the ethics of euthanasia in extraordinary circumstances."– Macleans

“Meticulously researched… Throughout this horrifying, fascinating book, Fink, a physician, maintains the highest journalistic standards. Her reporting is detailed, nuanced and far-reaching, yet it is never biased--a stunning accomplishment in a story with this kind of moral complexity.  [Fink] gives voice to all sides–the doctors, nurses, families, and patients themselves–and leaves the conclusions and judgments, none of which can or ever will be easily reached, to the reader. This is a book not to be missed. It is, quite simply, required reading.” — Shelf Awareness (starred)

“[Fink] offers a stunning re-creation of the storm, its aftermath, and the investigation that followed…She evenhandedly compels readers to consider larger questions, not just of ethics but race, resources, history, and what constitutes the greater good, while humanizing the countless smaller tragedies that make up the whole. And, crucially, she provides context, relating how other hospitals fared in similar situations. Both a breathtaking read and an essential book for understanding how people behave in times of crisis.” – Booklist (starred)

“In this astonishing blend of Pulitzer Prize–winning journalism (Fink, who also has an M.D. and Ph.D., won the award for the investigative reporting on which this book is based) and breathtaking narration, she chronicles the chaotic evacuation of the hospital and the agonizing ethical, physical, and emotional quandaries facing Memorial nurses and doctors, including a nightmarish triage process that led to the controversial decision to inject critically ill patients with fatal doses of morphine in order to refocus attention on those with a chance of surviving.”- Publishers Weekly (starred)

“Pulitzer Prize–winning medical journalist/investigator Fink (War Hospital, 2003) submits a sophisticated, detailed recounting of what happened at Memorial Medical Center in New Orleans during and after Hurricane Katrina. Fink draws those few days in the hospital’s life with a fine, lively pen, providing stunningly framed vignettes of activities in the hospital and sharp pocket profiles of many of the characters. She gives measured consideration to such explosive issues as class and race discrimination in medicine, end-of-life care, medical rationing and euthanasia, and she presents the injection of some patients with a cocktail of drugs to reduce their breathing in such a manner that readers will be able to fully fashion their own opinions. The book is an artful blend of drama and philosophy [and] with apparent effortlessness, Fink tells the Memorial story with cogency and atmosphere.” - Kirkus Reviews (starred)

“Fink’s six years of research and more than 500 interviews yield a rich narrative full of complex characters, wrenching ethical dilemmas, and mounting suspense. General readers and medical professionals alike will finish the book haunted by the question,'What would I have done?'”  - Library Journal (starred)

"In a high speed world that reduces reality to black and white, Sheri Fink slows down to examine every achingly tough decision made by medical responders to Hurricane Katrina. The riveting result  is nuanced and leaves you asking, 'Well, what would I have done?' Wow." - Laurie Garrett, Pulitzer Prize-winning writer and author of I Heard the Sirens Scream

"Sheri Fink is one of the best medical journalists working in the United States today and Five Days at Memorial stands as evidence of her ability to tell a can't-put-down story, and also her ability to delve into the troubled and sometimes heart-breaking state of medical care in this country today. Read it because it's a compelling look at a hurricane-driven medical catastrophe - and read it because it matters." -Deborah Blum, author of The Poisoner's Handbook

“Sheri Fink has once again revealed the necessity of honorable journalism:  to show us, precisely, why intelligence and information are of critical use.  She respects the reader by her labor—gathering the details, earning our engagement as she unfolds the complexity of this story, fact by painstaking fact.  Fink invites us into a fuller understanding of five days at Memorial Hospital, the deeper dynamics of which are much in play in America, today.  The stakes couldn’t be higher.” –Adrian LeBlanc, author of Random Family

SHERI FINK'S reporting has won the Pulitzer Prize, the National Magazine Award, and the Overseas Press Club Lowell Thomas Award, among other journalism prizes. Fink, a former relief worker in disaster and conflict zones, received her MD and PhD from Stanford University. Her first book, War Hospital, is about medical professionals under siege during the genocide in Srebrenica, Bosnia-Herzegovina.
Loading...
or
Not Currently Available for Direct Purchase