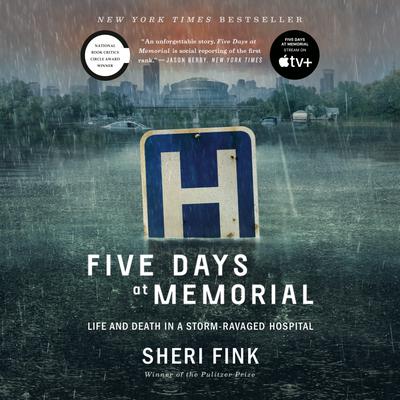 Pulitzer Prize winner Sheri Fink’s landmark investigation of patient deaths at a New Orleans hospital ravaged by Hurricane Katrina—and her suspenseful portrayal of the quest for truth and justice.

In a voice at once involving and fair, masterful and intimate, Fink exposes the hidden dilemmas of end-of-life care and reveals just how ill-prepared we are for the impact of large-scale disasters—and how we can do better. A remarkable book, engrossing from start to finish, Five Days at Memorial radically transforms your understanding of human nature in crisis.

SHERI FINK'S reporting has won the Pulitzer Prize, the National Magazine Award, and the Overseas Press Club Lowell Thomas Award, among other journalism prizes. Fink, a former relief worker in disaster and conflict zones, received her MD and PhD from Stanford University. Her first book, War Hospital, is about medical professionals under siege during the genocide in Srebrenica, Bosnia-Herzegovina.