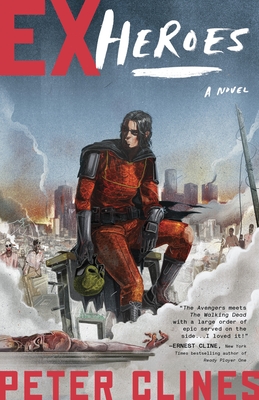 “The Avengers meets The Walking Dead with a large order of epic served on the side. . . . I loved it!”—Ernest Cline, New York Times bestselling author of Ready Player One

Then the plague of living death spread around the globe. Billions died, civilization fell, and the city of angels was left a desolate zombie wasteland.

Now, a year later, the Mighty Dragon and his companions protect a last few thousand survivors in their film-studio-turned-fortress, the Mount. Scarred and traumatized by the horrors they’ve endured, the heroes fight the armies of ravenous ex-humans at their citadel’s gates, lead teams out to scavenge for supplies—and struggle to be the symbols of strength and hope the survivors so desperately need.

But the hungry ex-humans aren’t the only threats the heroes face. Former allies, their powers and psyches hideously twisted, lurk in the city’s ruins. And just a few miles away, another group is slowly amassing power . . . led by an enemy with the most terrifying ability of all.

“Zombies? Check. Superheroes? Check. Awesome? Check. Ex-Heroes has it all. You're in for a treat!”—Mira Grant, New York Times bestselling author of Feed

Praise For Ex-Heroes: A Novel…

PETER CLINES has published several pieces of short fiction and countless articles on the film and television industries, as well as the novels Ex-Patriots, Ex-Communication, Ex-Purgatory, and 14.  He lives and writes in southern California.