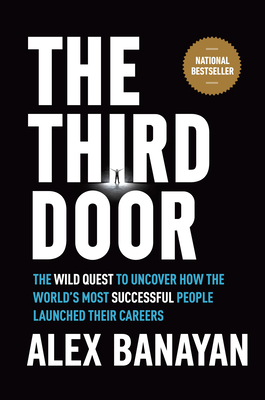 The larger-than-life journey of an 18-year-old college freshman who set out from his dorm room to track down Bill Gates, Lady Gaga, and dozens more of the world’s most successful people to uncover how they broke through and launched their careers.

The Third Door takes readers on an unprecedented adventure—from hacking Warren Buffett’s shareholders meeting to chasing Larry King through a grocery store to celebrating in a nightclub with Lady Gaga—as Alex Banayan travels from icon to icon, decoding their success. After remarkable one-on-one interviews with Bill Gates, Maya Angelou, Steve Wozniak, Jane Goodall, Larry King, Jessica Alba, Pitbull, Tim Ferriss, Quincy Jones, and many more, Alex discovered the one key they have in common: they all took the Third Door.

Life, business, success… it’s just like a nightclub. There are always three ways in. There’s the First Door: the main entrance, where ninety-nine percent of people wait in line, hoping to get in. The Second Door: the VIP entrance, where the billionaires and celebrities slip through. But what no one tells you is that there is always, always… the Third Door. It’s the entrance where you have to jump out of line, run down the alley, bang on the door a hundred times, climb over the dumpster, crack open the window, sneak through the kitchen—there’s always a way in. Whether it’s how Bill Gates sold his first piece of software or how Steven Spielberg became the youngest studio director in Hollywood history, they all took the Third Door.

Praise For The Third Door: The Wild Quest to Uncover How the World's Most Successful People Launched Their Careers…

“Exhilarating and empowering . . . If you care about your success, you have to read The Third Door.”
—TONY ROBBINS, entrepreneur, New York Times bestselling author, philanthropist, and the nation’s #1 life and business strategist


“From redefining success with Steve Wozniak to staring death in the eyes with Jessica Alba, this book is packed with adventure, drama, and remarkable lessons the whole way through. Whether you‘re an executive or a recent college graduate, you’ll find inspiration and wisdom in The Third Door.”
—ARIANNA HUFFINGTON, founder of The Huffington Post and New York Times bestselling author of Thrive


"The Third Door is at once a spirited coming-of-age story and a hard-headed examination of what it takes to succeed at the highest levels. Alex Banayan has cracked the code of the world’s most successful people and shown he will soon join their ranks.”
—DANIEL H. PINK, New York Times bestselling author of When, Drive, and A Whole New Mind


“An emotional roller coaster . . . I laughed. I cried. I was on the edge of my seat the whole time . . . Once every few decades a book comes along that defines a generation. The Third Door is it.”
—ELIANA MURILLO, head of multicultural marketing at Google


“A treasure chest of wisdom . . . knowledge that can be used by anyone, anywhere, who wants to take their journey further . . . Banayan has become one of the most equipped guides to help you climb higher mountains in your life.”
—SHAWN ACHOR, New York Times bestselling author of The Happiness Advantage and Big Potential


“Unlike any business book I've read. The Third Door is a thrill ride of hope, joy, ambition, and self-discovery. I cheered out loud, and at different points, tears trickled down my face . . . The Third Door motivated me turn up the volume in my life . . . A triumph.”
—MAYA WATSON BANKS, director of marketing at Netflix


“A cinematic story full of drama, betrayal, and heartbreak. The Third Door takes you on a narrative adventure packed with life-changing lessons. Once you start reading, you can’t stop.”
—JONAH BERGER, New York Times bestselling author of Contagious: Why Things Catch On


“Powerful . . . One of the best books of the year . . . After reading The Third Door, an uncontrollable shift happened in my life—I started to see the challenges in front of me as fun. This book not only gave me new tools to achieve my goals, but it also showed me how exciting it can be to tackle seemingly impossible obstacles. If you want to take your life to the next level, you have to read The Third Door.”
—MIKE POSNER, Grammy Award-nominated and multiplatinum musician


“Banayan’s heart is poured into every page of this book. The Third Door is not only a guide to how the world’s most remarkable pioneers succeeded, but it’s also a magnificent story of one boy’s journey to achieve his dream. The Third Door drips with passion and emotion—and it’s a must-read for anyone wanting to turn their vision into a reality.”
—ADAM BRAUN, New York Times nestselling author of The Promise of a Pencil


“A wild ride . . . Inspiring, hilarious, and insightful. Whenever you start to believe there’s no other way to solve your problem, let Alex Banayan inspire you to think bigger.”
—DAVID EAGLEMAN, New York Times bestselling author of Incognito, host of PBS’ The Brain, and adjunct professor at Stanford University


“As a Jewish mother, I don’t want my teenage kids to read this book and get any ideas about dropping out of school. However, as someone who has served as a senior diplomat, tech executive, and social innovation entrepreneur, I want to put it at the top of their reading list! The Third Door is required reading for anyone in today’s dynamic society who wants to learn success from the best.”
—SUZI LEVINE, United States Ambassador to Switzerland and Liechtenstein (Ret.)


“In just a few hours of reading this book, Alex Banayan taught how to meet billionaires, leapfrog my associates, and achieve my dreams in record time. I’ve never read anything quite like this! Whether you are an entrepreneur or trying to jumpstart your career, The Third Door will open up your world of possibilities.”


“My grandfather used to tell me: ‘If a problem has a solution, why worry?’ And it’s precisely that attitude of optimism and possibility that has so inspired me about Banayan’s The Third Door. He wasted little time worrying: ‘What if?’ He went for it. And that made all the difference.”
—JASON SILVA, Emmy-nominated host of National Geographic’s Brain Games

“Equal parts badass and wise, The Third Door ushers you inside an epic journey of invention and determination. Banayan’s quest to discover the keys to the world’s most impossible doors unlocks the hidden power in each of us.”
—BRAD DELSON, lead guitarist of the Grammy Award-winning rock band Linkin Park


“Wild adventures. Incredible stories. Immensely practical advice. The Third Door has it all—and it’s exactly what our generation has been waiting for.”
—BEN NEMTIN, star of MTV’s The Buried Life and New York Times bestselling author of What Do You Want To Do Before You Die


“Alex Banayan was intent on creating his ‘dream university’—Bill Gates would teach business; Lady Gaga, music; Steven Spielberg, film; Jane Goodall, science—and that vision became a reality. This book proves that education is one of the most powerful forces in the world, and it’s made even more powerful when you take charge of your own learning.“
—KAREN CATOR, former director of the Office of Educational Technology at the U.S. Department of Education


“Gripping stories . . . The Third Door is that rare book where the author lives the advice he’s sharing. Alex Banayan redefines the meaning of entrepreneurial hustle and hard work. Prepare to be humbled—and inspired.”
—BEN CASNOCHA, New York Times bestselling coauthor of The Start-Up of You


“The Third Door draws upon lessons from some of today’s most inspiring figures in business and popular culture, and by doing so provides a masterclass in innovation, entrepreneurship, and creative problem-solving across generations. It is a must-read for aspiring entrepreneurs and corporate leaders alike.”
—LEXIE KOMISAR, global program director for growth and strategic partnerships at IBM


“Banayan personifies creativity, hustle, and passion. He’s the embodiment of the next generation of entrepreneurial leader and The Third Door beautifully brings this mindset to life.”
—JOSH LINKNER, New York Times bestselling author of Disciplined Dreaming and Hacking Innovation


“Alex Banayan’s approach to solving problems is as hilarious as it is brilliant. Whether you’re an accomplished entrepreneur, an aspiring one, or an executive trying to get your employees to think outside the box, The Third Door is the way forward.”
—MEREDITH PERRY, founder of uBeam


"A surprising combination of bildungsroman, spiritual journey, and caper comedy, The Third Door creates an opportunity for all of us to inspect what success means, what's inspires us, and how we think about our paths through the world.”
—MICHAEL SLABY, chief innovation officer of the Obama 2012 Presidential Campaign and executive director of Chicago Ideas


“Alex Banayan’s The Third Door was absolutely worth the wait! He perfectly captures amazing insights, while being funny and approachable. Banayan’s journey leaves you not only inspired, but also excited to pursue your dreams and define success in your own way.”
—KAMAURI YEH, director of west coast brand experience at Nike


“Banayan’s hustle is insane. He crouched in bathrooms, chased people through grocery stores—he did whatever it took to make his dream happen. The extents he went through will inspire you to keep grinding on your path. If you are hungry to succeed, trust me: read The Third Door.”
—JERMAINE DUPRI, Grammy-award winning rapper and music producer


“Engrossing . . . Brilliantly insightful. Applicable and useful. I found myself nodding in places and re-reading passages . . . Banayan demystifies the hardest and scariest thing many of us have to do to succeed.”
—DR. M SANJAYAN, CEO of Conservation International and host of PBS’ EARTH: A New Wild


“Whether you are just beginning your first act, or setting off on your twentieth, this may be the best and most thoroughly enjoyable career advice book you will ever read: fast moving, funny, big-hearted, and constantly insightful.”
—MATTHEW BISHOP, author of Philanthrocapitalism and former business editor of The Economist


“Banayan’s incredible journey, told with wit, warmth, and wisdom, explores his own search for meaning through the personal stories of his heroes. An inspiring read for anyone looking to find their purpose.”
—RUMA BOSE, author of Mother Teresa, CEO: Unexpected Principles for Practical Leadership


“I wish I had The Third Door when I was starting my first business. Thankfully, Banayan has delivered the book we’ve all been waiting for.”
—MICHAEL LAZEROW, former chief strategy officer of Salesforce and founder of Buddy Media


“A brilliant writer . . . I couldn’t stop reading once I started. The Third Door is a must-read for entrepreneurs.”
—VIVEK WADHWA, columnist for the Washington Post and distinguished fellow at Carnegie Mellon University

The day before his freshman year final exams, ALEX BANAYAN hacked The Price Is Right, won a sailboat, sold it, and used the prize money to fund his quest to learn from the world’s most successful people. Since then, Banayan has been named to Forbes' "30 Under 30" list and Business Insider’s "Most Powerful People Under 30." He has contributed to FastCompany, The Washington Post, Entrepreneur, and TechCrunch, and has been featured in major media including Fortune, Forbes, Businessweek, Bloomberg TV, Fox News, and CBS News. An acclaimed keynote speaker, Banayan has presented the Third Door framework to business conferences and corporate leadership teams around the world, garnering standing ovations from Apple, Nike, IBM, Dell, MTV, Harvard, and countless others.
Loading...
or support indie stores by buying on