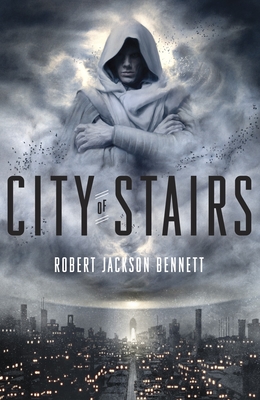 A Novel (The Divine Cities #1)

An atmospheric and intrigue-filled novel of dead gods, buried histories, and a mysterious, protean city--from one of America's most acclaimed young science fiction writers.

The city of Bulikov once wielded the powers of the gods to conquer the world, enslaving and brutalizing millions—until its divine protectors were killed. Now Bulikov has become just another colonial outpost of the world's new geopolitical power, but the surreal landscape of the city itself—first shaped, now shattered, by the thousands of miracles its guardians once worked upon it—stands as a constant, haunting reminder of its former supremacy.

Into this broken city steps Shara Thivani. Officially, the unassuming young woman is just another junior diplomat sent by Bulikov's oppressors. Unofficially, she is one of her country's most accomplished spies, dispatched to catch a murderer. But as Shara pursues the killer, she starts to suspect that the beings who ruled this terrible place may not be as dead as they seem—and that Bulikov's cruel reign may not yet be over.

Praise For City of Stairs: A Novel (The Divine Cities #1)…

"A delightful urban fantasy that travels through a city full of Escher-like staircases and alternate realities...A diverse and entertaining cast of old gods fleshes out the ruins of this mysterious city, and Shara’s hit-man secretary delivers nonstop action."
--Washington Post

[An] incredible journey through a wondrously weird and surprising world...I found myself both delighted and fascinated as every layer was slowly unpacked. Just the right mix of awesome."
--Tor.com

“Suddenly, the pages are whipping by, 50 at a clip as mysteries are uncovered, miracles happen and assassins begin scaling the walls. … Bennett is plainly a writer in love with the world he has built — and with good cause. It's a great world, original and unique, with a scent and a texture, a sense of deep, bloody history, and a naturally-blended magic living in the stones.”
--NPR.org

"Robert Jackson Bennett deserves a huge audience. This is the book that will earn it for him. A story that draws you in, brilliant world building, and oh my God, Sigrud. You guys are going to love Sigrud."
--Brent Weeks, New York Times bestselling author of The Way of Shadows

"Smart and sardonic, with wry echoes from classic tales mixed up in an inventive, winning narrative. [Bennett is] a master of the genre."
--Kirkus

A rich, layered, thoughtful story, full of gods and magic and characters that feel unflinchingly true…every once in a while I read a book that’s so well done, I find myself wanting to punch the author in the face out of pure envy. Congratulations, Mr. Bennett – you just made the face-punching list!
--Jim C. Hines, Hugo Award winning author of Libriomancer

"Alien and human at the same time, Bennett's world is engrossing and fascinating. The pacing kept me reading far later than was healthy."
--Mur Lafferty, Campbell Award winning author of Playing for Keeps

ROBERT JACKSON BENNETT is the author of American Elsewhere, The Troupe, The Company Man, and Mr. Shivers. His books have been awarded the Edgar Award, the Shirley Jackson, and the Philip K. Dick Citation of Excellence. He lives in Austin with his wife and son.
Loading...
or support indie stores by buying on