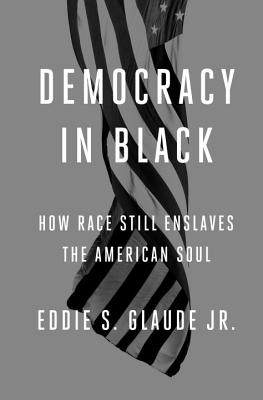 A powerful polemic on the state of black America that savages the idea of a post-racial society.

America’s great promise of equality has always rung hollow in the ears of African Americans. But today the situation has grown even more dire. From the murders of black youth by the police, to the dismantling of the Voting Rights Act, to the disaster visited upon poor and middle-class black families by the Great Recession, it is clear that black America faces an emergency—at the very moment the election of the first black president has prompted many to believe we’ve solved America’s race problem.

Democracy in Black is Eddie S. Glaude Jr.'s impassioned response. Part manifesto, part history, part memoir, it argues that we live in a country founded on a “value gap”—with white lives valued more than others—that still distorts our politics today. Whether discussing why all Americans have racial habits that reinforce inequality, why black politics based on the civil-rights era have reached a dead end, or why only remaking democracy from the ground up can bring real change, Glaude crystallizes the untenable position of black America--and offers thoughts on a better way forward. Forceful in ideas and unsettling in its candor, Democracy In Black is a landmark book on race in America, one that promises to spark wide discussion as we move toward the end of our first black presidency.

EDDIE S. GLAUDE JR. is a professor at Princeton University, teaching in the religion department and the Department of African American Studies.

Praise For Democracy in Black: How Race Still Enslaves the American Soul…

“Eddie Glaude speaks some hard truths in this important new book. Glaude is the fiercest of thinkers, and this book is a brilliant and crucial prescription for necessary change.” —Henry Louis Gates Jr.

“This powerful and timely book should shape the framework for a post-Obama America—a bold rejection of black liberal politics and a prophetic call for a revolution of value that reinvigorates our democratic life with imagination and courage.”
—Cornel West

“Democracy in Black tells necessary truths about the state of race and justice in America and challenges us to embrace genuinely -- not merely rhetorically -- the revolution of values preached by Dr. King.” —Michelle Alexander, author of The New Jim Crow

“Eddie Glaude has written a book that challenges and demands as well as one that informs and inspires. This is a very important book, I am better for having read it and even more motivated in my work and mission.” –U.S. Senator Cory Booker

“Democracy in Black is an urgent, clear-eyed manifesto.  It proves not only that Black Lives Matter, but Black social movements matter if the nation ever hopes to lift the veil of racism and long shadow of slavery.” –Robin D. G. Kelley, author of Freedom Dreams: The Black Radical Imagination

“Eddie Glaude writes compellingly of the collective moral and intellectual failures locking Americans into a repetitive “human value gap.” This book documents why and how race remains our ultimate, even dedicated, civic irrationality.” –Patricia J. Williams, author of Seeing a Color-blind Future

“Democracy in Black tells a powerful story about democracy in action in the streets of Ferguson. People should read it and be transformed by Eddie Glaude’s call for a revolution of values. I hope it is read widely.” —James H. Cone, Union Theological Seminary

“Democracy in Black puts a Toni Morrison question to a nation ‘between worlds’:  ‘Wanna fly?’ Listen up: ‘You got to give up the shit that weighs you down.’ Easier said than done. Read all about it. I did. Now I’m thinking about it all.” —Robert P. Moses, President, The Algebra Project, Inc.

“He proves his point cogently… with more than enough documentation to move the argument along this new and painful track…This is every bit as important a book as Coates’ more personal account: essential reading.” --Booklist

"A book for the ages...one of the most imaginative, daring books of the 21st century" --Los Angeles Times
or
Not Currently Available for Direct Purchase
Copyright © 2020 American Booksellers Association