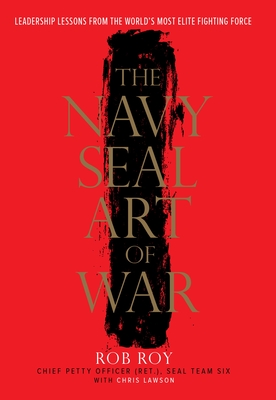 The Navy SEAL Art of War

Leadership Lessons from the World's Most Elite Fighting Force

In a groundbreaking, narrative-driven book for businesses, managers (and those who aspire to the managerial ranks), and entrepreneurs, a veteran Navy SEAL Chief Petty Officer shows how the skills that enable SEAL teams to achieve the impossible in the battlefield can help business executives and career-minded individuals make better decisions and get the best out of their teams.

Anyone can make good decisions when everything is in their favor. But in life, as in war, it’s in chaotic, challenging times that genuine leaders distinguish themselves. As a Navy SEAL Chief Petty Officer, Rob Roy learned this lesson over twenty-five years of combat, in which the difference between life and death was his team’s ability to decode complex environments, take decisive action, and seize opportunities when they presented themselves.
In The Navy SEAL Art of War, Roy decodes the leadership lessons of the battlefield for today’s business leaders and individuals: how to make good decisions under pressure, how to utilize and leverage the strengths of others while minimizing the weaknesses of the individual or team, and how to act instead of react, anticipating events despite having minimal information and effectively communicating tasks and priorities.
Illustrated with countless stories from the front lines, and featuring unprecedented exercises and drills from the SEALs’ training program, The Navy SEAL Art of War is destined to take its place aside It’s Your Ship as a bestselling business classic.

Rob Roy, Chief Petty Officer, spent twenty years as a Navy SEAL (including service on the legendary SEAL Team Six) before founding Sot-G, an eighty-hour intensive leadership course that uses military combat training to teach executives and managers the leadership skills they need to succeed in business and in life. The program has been featured in the Wall Street Journal, Entrepreneur, and Inc.


Chris Lawson is the speechwriter to the Secretary of the U. S. Army, the Honorable John McHugh, and was previously the chief civilian speechwriter for Gen. Martin Dempsey, the Chairman of the Joint Chiefs of Staff. Lawson a former national security journalist for Gannett, as well as the former managing editor for the Army Times and the Navy Times, and a former managing editor for Men’s Health magazine. He served for six years as a Marine Corps Combat Correspondent, from 1985 to 1991, and was the Corps’ Journalist of the Year in 1989. He lives in Northern Virginia with his wife and family.
Loading...
or
Not Currently Available for Direct Purchase