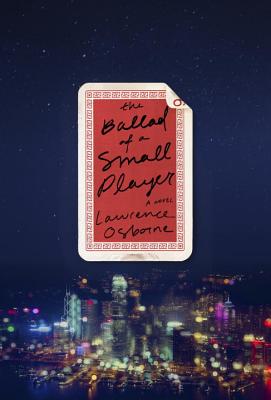 The Ballad of a Small Player

A riveting tale of risk and obsession set in the alluring world of Macau's casinos, by the author of the critically acclaimed "The Forgiven."
As night falls on Macau and the neon signs that line the rain-slick streets come alive, Doyle Lord Doyle to his fellow players descends into his casino of choice to try his luck at the baccarat tables that are the anchor of his current existence. A corrupt English lawyer who has escaped prosecution by fleeing to the East, Doyle spends his nights drinking and gambling and his days sleeping off his excesses, continually haunted by his past. Taking refuge in a series of louche and dimly lit hotels, he watches his fortune rise and fall as the cards decide his fate.
In a moment of crisis he meets Dao-Ming, an enigmatic Chinese woman who appears to be a denizen of the casinos just like himself, and seems to offer him salvation in the form of both money and love. But as Doyle attempts to make a rare and true connection, all that he accepts as reality seems to be slipping from his grasp.
Resonant of classics by Dostoevsky and Graham Greene, "The Ballad of a Small Player" is a timeless tale steeped in eerie suspense and rich atmosphere.


Praise For The Ballad of a Small Player…

“Haunting…A captivating story about the nature of addiction, the power of the supernatural and the freedom that may come from throwing everything to chance.”—NPR

"A searing portrait of addiction and despair set in the glittering world of Macau's casinos...Osborne's intriguing Chinese milieu and exquisite prose make this work as a standout."—Publishers Weekly (starred review)

“Osborne masterfully recreates the atmosphere of casinos as well as the psychology of baccarat players—and leaves readers eager to try their luck at the game.”—Kirkus

“Osborne’s The Forgiven, an Economist Best Book of the Year (and one of my personal Bests from last year, too), is as brilliant, unsentimental a rendering of contemporary East-West conflict and the imperfect human psyche as you are likely to find. His new work proceeds in that tradition…Don’t miss”—Library Journal

Praise for Lawrence Osborne's The Forgiven


“A sinister and streamlined entertainment in the tradition of Paul Bowles, Evelyn Waugh and the early Ian McEwan….This is a lean book that moves like a panther. Even better, Mr. Osborne has a keen and sometimes cruel eye for humans and their manners and morals, and for the natural world. You can open to almost any page and find brutally fine observations….surprising and dark and excellent.”
– New York Times

“Extraordinarily acute to human nature….Stylishness holds the book together, and makes all the bits of plot machinery feel new again….There are enough ways to read the book that one finishes it and immediately wants to start it again.”
– Newsweek

“A perfect storm of a novel.” – Fredericksburg Freelance Star

"A master of the high style" – The Guardian

"Osborne writes mercilessly, savagely well. He excavates his characters, and the centuries-long cultural rift between the desert people and the Western infidels with a pathologist’s precision, wrapping fear, boredom, forgiveness, judgment, honour and sexual attraction into a novel that plunges with sinister pace towards its denouement." – The Daily Mail

"Brooding, compelling...There’s a strong, almost old-fashioned moral force at work in Osborne’s novel... At the novel’s dramatic close, you could accuse Osborne of forcing the hand of moral come-uppance just a little too much — but it barely detracts from the tension he has maintained throughout the novel, and the pleasure of his bringing under such scrutiny the unpredictable behaviour of his morally tortuous characters." – The London Sunday Times

“With nods to Paul Bowles and Evelyn Waugh, Osborne portrays the vacuity of high society as gorgeously and incisively as he does the unease of cultures thrust together in the unforgiving desert.” – Publishers Weekly (starred)

“Osborne comes up with an ending that’s at the same time ironic, surprising and completely fitting. A gripping read with moral ambiguity galore.”
– Kirkus Reviews (starred)

“[A] brilliant, unsentimental rendering of contemporary East-West conflict and the imperfect human psyche….Osborne has done an extraordinary job of capturing moral complexity, never letting his characters or his readers off easy. The result should be grim reading, but instead it’s vivifying. Highly recommended.”
– Library Journal (starred)

“In the desert, all life and emotions are stripped to their very core. In his elegant and incisive second novel, travel-journalist Osborne hauntingly captures this exposed essence in all its inscrutable mystery and dispassionate brutishness.”
– Booklist Online

“No mere imitation but a contribution to the shelf on which The Sheltering Sky and The Bonfire of the Vanities also sit, The Forgiven explores the clash of two cultures, each of which feels superior to the other. Osborne's writing is uncomfortably well observed; his story is sickeningly, addictively headlong.”
– Lionel Shriver, author of We Need to Talk About Kevin

"The Forgiven shines darkly with a rich and mordant fatalism. Osborne's characters emerge like people in a dream – diamond-sharp but fascinatingly askew. His prose is gorgeous and precise; the story slices keenly through the exotic haze of its setting. It's an absolutely brilliant novel – the ending is a shock in the best way." – Kate Christensen, author of The Epicure's Lament and The Astral

“The prose of The Forgiven has a very particular, knowing luminosity, much like the tarnished world it describes. A beautiful, compelling book to savor line by line.”
– Nikita Lalwani, author of Gifted

LAWRENCE OSBORNE is the author of the bestselling novel "The Forgiven" and six books of nonfiction. His short story "Volcano" was selected for Best American Short Stories 2012, and he has written for the "New York Times Magazine," the" New Yorker," "Forbes," "Harper's," and several other publications.