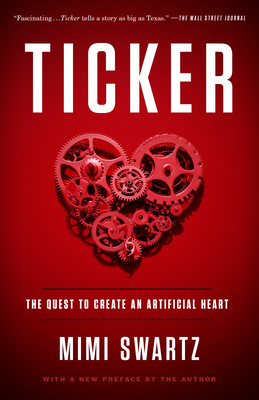 The Quest to Create an Artificial Heart

It wasn’t supposed to be this hard. If America could send a man to the moon, shouldn’t the best surgeons in the world be able to build an artificial heart? In Ticker, Texas Monthly executive editor and two time National Magazine Award winner Mimi Swartz shows just how complex and difficult it can be to replicate one of nature’s greatest creations.

Part investigative journalism, part medical mystery, Ticker is a dazzling story of modern innovation, recounting fifty years of false starts, abysmal failures and miraculous triumphs, as experienced by one the world’s foremost heart surgeons, O.H. “Bud” Frazier, who has given his life to saving the un-savable.

His journey takes him from a small town in west Texas to one of the country’s most prestigious medical institutions, The Texas Heart Institute, from the halls of Congress to the animal laboratories where calves are fitted with new heart designs. The roadblocks to success —medical setbacks, technological shortcomings, government regulations – are immense. Still, Bud and his associates persist, finding inspiration in the unlikeliest of places. A field beside the Nile irrigated by an Archimedes screw. A hardware store in Brisbane, Australia. A seedy bar on the wrong side of Houston.

Until post WWII, heart surgery did not exist. Ticker provides a riveting history of the pioneers who gave their all to the courageous process of cutting into the only organ humans cannot live without. Heart surgeons Michael DeBakey and Denton Cooley, whose feud dominated the dramatic beginnings of heart surgery. Christian Barnaard, who changed the world overnight by performing the first heart transplant. Inventor Robert Jarvik, whose artificial heart made patient Barney Clark a worldwide symbol of both the brilliant promise of technology and the devastating evils of experimentation run amuck.

Rich in supporting players, Ticker introduces us to Bud’s brilliant colleagues in his quixotic quest to develop an artificial heart: Billy Cohn, the heart surgeon and inventor who devotes his spare time to the pursuit of magic and music; Daniel Timms, the Brisbane biomedical engineer whose design of a lightweight, pulseless heart with but a single moving part offers a new way forward.  And, as government money dries up, the unlikeliest of backers, Houston’s furniture king, Mattress Mack.

In a sweeping narrative of one man’s obsession, Swartz raises some of the hardest questions of the human condition. What are the tradeoffs of medical progress?   What is the cost, in suffering and resources, of offering patients a few more months, or years of life? Must science do harm to do good?  Ticker takes us on an unforgettable journey into the power and mystery of the human heart.

Praise For Ticker: The Quest to Create an Artificial Heart…

“It doesn’t take an acute interest in the human heart to be hooked after only a few pages of Ticker. And…how’s this for a reason to read it: heart disease, Swartz notes early on, is responsible for the largest number of deaths in the U.S. and worldwide.”
-Vanity Fair

“Doctors and researchers have long recognized the need for an artificial organ, or . . . a machine of some kind that can assist a diseased heart until a transplant candidate can be found. The Holy Grail is a device that would make transplants altogether unnecessary.  The search for that grail has been, as Mimi Swartz shows in her fascinating book, as complicated as the essential organ itself. Ticker: The Quest to Create an Artificial Heart tells a story as big as Texas. . ."
-The Wall Street Journal

“A developing story about. . . innovation, daring, perceived double-crosses, competition and conflict. . . Ticker beats at an accelerated rate. . . Writer Jane Mayer compared it to The Right Stuff, with which it shares some commonalities: the tension of daredevilry in the name of research and development, and multiple characters who are brilliant, eccentric and driven.”
-The Houston Chronicle

“In bringing to life more than 70 years of medical history, Swartz often achieves a novelist’s level of telling detail, the kind that can only result from determined, painstaking reporting.. . Ticker makes achieving a truly viable version [of an artificial heart] . . . seem not just possible, but inevitable.”
-The Texas Observer

“A frequently hypnotic story. . . of the nexus between talent, institutional support, experimentation and money.”
-Austin American-Statesman

“[A] pacy, blow-by-blow account of the search for a viable artificial heart. . . Swartz offers a vivid gallery of the medical pioneers who have jostled for the prize.”
-Nature.com

“A riveting medical thriller…Told in an appropriately over-the-top style, this is a quintessentially Texas story: sprawling, unpredictable, and teeming with risk and opportunity.”
-Publishers Weekly

“Even casually interested readers will become fascinated by Swartz's vivid depiction of Frazier at work in the operating room…Swartz is a witty, savvy, seasoned journalist, and she offers a welcome history of significant medical advances."
-Kirkus Reviews

“Smart, compelling, and completely engaging, Ticker is a story about science, personality, innovation, and obsession, all in pursuit of a staggering accomplishment, the creation of an artificial heart. Mimi Swartz drives the narrative with great style and deep reporting; it’s a book anyone with a heart will love.”
-Susan Orlean, author of Rin Tin Tin: The Life and the Legend and The Orchid Thief

“A remarkable journey through the harrowing world of heart surgery, as a brilliantly gifted and eccentric team of doctors work to develop a complete artificial heart, to save the thousands of patients a year whose hearts are failing.”
-Bryan Burrough, author of Public Enemies, The Big Rich and Barbarians at the Gate

“Ticker is like a medical version of Tom Wolfe's The Right Stuff. Swartz takes you into the operating theater with some of the most brilliant, ingenious and driven heart specialists in the world. It's a book full of memorable characters grappling with life-threatening crises, which is both illuminating about modern medicine, and also just a wonderful read.”
-Jane Mayer, author of Dark Money

"Ticker is a page-turner, a mind-expander, a heart-pounder.  Swartz unveils a wild story of medical innovation with the keen eye of a storyteller."
-David Eagleman, Stanford University neuroscientist and internationally bestselling author of The Brain and Incognito

“A fast paced, utterly riveting tale of the decades of effort that have gone into developing an artificial heart. The characters, many of whom dedicated their lives to this quest, are captivating, and their rivalries are the stuff of legend.”
-Bethany McLean, co-author of All the Devils Are Here and The Smartest Guys in the Room

“A thrilling and affecting account of a modern medical miracle. Ticker is not only an inspiring tale of persistence, imagination, and sacrifice, it’s also a joy to read.”
-Lawrence Wright, Pulitzer Prize winning author of The Looming Tower and God Save Texas

“Who knew that the story of the artificial heart was such a rip-roaring one, with one larger-than-life character after another, and plot twists galore?  In Ticker, Mimi Swartz has told that story with verve and elegance, and brought those characters to vivid life. A wonderful work of nonfiction by a wonderful nonfiction writer.”
-Joe Nocera, Bloomberg News columnist and author of Indentured: The Inside Story of the Rebellion Against the NCAA

“An exciting, propulsive, and at times surprisingly tender account of the swashbuckling surgeons and inventive geniuses who achieved one of the greatest medical breakthroughs—the development of the artificial heart. Mimi Swartz has done an outstanding job, and uncovered the human story behind the triumph of technology.”
-Jennet Conant, New York Times bestselling author of Tuxedo Park and 109 East Palace

Mimi Swartz is a long-time executive editor at Texas Monthly, and a two-time National Magazine Award winner and a four time finalist. The coauthor of the national bestseller Power Failure, with Sherron Watkins, about the failures at Enron, her work has appeared in Vanity Fair, The New Yorker, Esquire, Slate, and her op-ed pieces appear regularly in the New York Times.
Loading...
or support indie stores by buying on