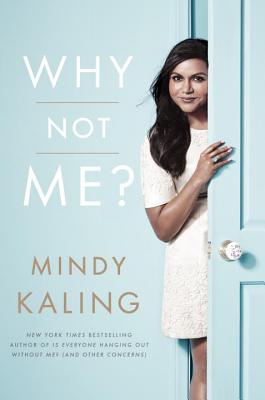 From the author of the beloved New York Times bestselling book Is Everyone Hanging Out Without Me? and the creator and star of The Mindy Project comes a collection of essays that are as hilarious and insightful as they are deeply personal.

In Why Not Me?, Kaling shares her ongoing journey to find contentment and excitement in her adult life, whether it’s falling in love at work, seeking new friendships in lonely places, attempting to be the first person in history to lose weight without any behavior modification whatsoever, or most important, believing that you have a place in Hollywood when you’re constantly reminded that no one looks like you.

“Hilarious…Kaling knows her strengths, and plays to them brilliantly…Aside from that effortlessly conversational tone and her pitch-perfect humor, Kaling’s biggest strength here is curatorial. She gives us the candy we came for – the advice, the anecdotes, the straight talk on body image – but sprinkles in something extra.”—Entertainment Weekly, A-

MINDY KALING lives in rural New Hampshire and does not own a TV.