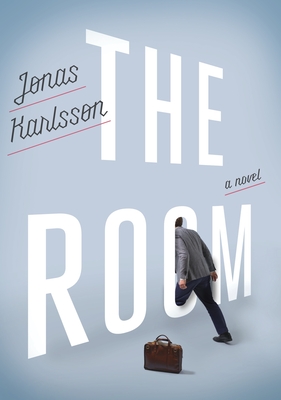 “An employee at a mundane office in Sweden, Bjorn knows that he is better than his contemporaries and does whatever it takes to get the recognition he feels he deserves. He finds that recognition in 'the room,' an otherwise unremarkable space between the elevators and the toilets, except for the fact that it seems to exist only for him. In 'the room,' Bjorn feels more powerful, more attractive, and able to take control of the work environment he finds upsettingly sloppy. Unfortunately for Bjorn, his coworkers only see him as a man staring at a wall for inordinate periods and try to keep him from this unsettling behavior. Brilliantly crafted and sharply funny.”
— Kelsey Myers, Old Firehouse Books, Fort Collins, CO
View the List

“The daily grind got you down? Escape into this Swedish dark comedy about a scaldingly contemptuous office drone who discovers a secret room in his workplace.”—O: The Oprah Magazine

Björn is a compulsive, meticulous bureaucrat who discovers a secret room at the government office where he works—a secret room that no one else in his office will acknowledge. When Björn is in his room, what his co-workers see is him standing by the wall and staring off into space looking dazed, relaxed, and decidedly creepy. Björn’s bizarre behavior eventually leads his co-workers to try and have him fired, but Björn will turn the tables on them with help from his secret room.

Debut author Jonas Karlsson doesn’t leave a word out of place in this brilliant, bizarre, delightful take on how far we will go—in a world ruled by conformity—to live an individual and examined life.

Praise For The Room: A Novel…

“Swedish actor and playwright Karlsson’s short novel offers a monologue that builds from simple office satire to a reality-bending psychological profile with insights into the nature and importance of personal space.”—Publishers Weekly (starred review)

“The Room, a modern, Bartleby-like examination of the tyranny of radical individualism, does mess with one's head, but in a most pleasurable way.”—BookPage

“Karlsson's prose and the inventiveness of Björn's surreal mental workings are often funny, but the overall impact is also deeply thought-provoking and profoundly disquieting, and the combination of the banal and the absurd results in a striking and singular read.” —Shelf Awareness

“The Room is the most effective chapbook on workplace comportment since Glengarry Glen Ross. Hats off!” —Nick Offerman, author of Paddle Your Own Canoe

“A gripping, tense, demonic fable in which the unease is precision-tooled and the turns of the screw wholly unexpected.” —Neel Mukherjee, author of The Lives of Others

“The daily grind got you down? Escape into this Swedish dark comedy about a scaldingly contemptuous office drone who discovers a secret room in his workplace.” —O: the Oprah Magazine, Ten Titles to Pick Up Now

“Surreal, funny and unsettling.” —The Independent

“Hilarious and chilling.” —Times of London

“Provocative…Karlsson’s deft jab at dead-end workplaces keeps you agreeably off-balance and eager for more of his work.” —Kirkus

“A flawless novel that you will finish with a smile.” —Knack (Netherlands)

“Sweden has its own Kafka in Jonas Karlsson.” —DeMorgen (Netherlands)

“Fascinating.… Every time you think you know where Bjorn is heading, he does or says something that tilts the whole story. Minimalism and surrealism, bundled in a short but powerful novel.” —DeZondag (Netherlands)

“The Room has the qualities of a masterpiece.” —Göteborgsposten (Sweden)

Jonas Karlsson writes plays and short fiction. One of Sweden's most prominent actors, Karlsson has performed on Sweden's premier stage and in several acclaimed feature films and television series. In 2005, Karlsson made his debut as a playwright, earning rave reviews from audience and critics alike. Spurred by the joy of writing for the stage, Karlsson began writing fiction.