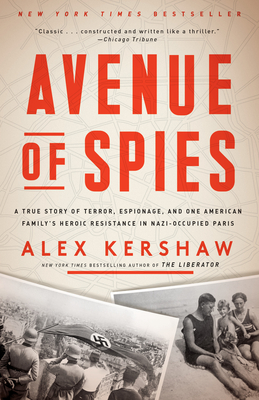 The best-selling author of The Liberator brings to life the incredible true story of an American doctor in Paris, and his heroic espionage efforts during World War II.

The leafy Avenue Foch, one of the most exclusive residential streets in Nazi-occupied France, was Paris's hotbed of daring spies, murderous secret police, amoral informers, and Vichy collaborators. So when American physician Sumner Jackson, who lived with his wife and young son Phillip at Number 11, found himself drawn into the Liberation network of the French resistance, he knew the stakes were impossibly high. Just down the road at Number 31 was the "mad sadist" Theodor Dannecker, an Eichmann protégé charged with deporting French Jews to concentration camps. And Number 84 housed the Parisian headquarters of the Gestapo, run by the most effective spy hunter in Nazi Germany.

From his office at the American Hospital, itself an epicenter of Allied and Axis intrigue, Jackson smuggled fallen Allied fighter pilots safely out of France, a job complicated by the hospital director's close ties to collaborationist Vichy. After witnessing the brutal round-up of his Jewish friends, Jackson invited Liberation to officially operate out of his home at Number 11—but the noose soon began to tighten. When his secret life was discovered by his Nazi neighbors, he and his family were forced to undertake a journey into the dark heart of the war-torn continent from which there was little chance of return.

Drawing upon a wealth of primary source material and extensive interviews with Phillip Jackson, Alex Kershaw recreates the City of Light during its darkest days. The untold story of the Jackson family anchors the suspenseful narrative, and Kershaw dazzles readers with the vivid immediacy of the best spy thrillers. Awash with the tense atmosphere of World War II's Europe, Avenue of Spies introduces us to the brave doctor who risked everything to defy Hitler.

Praise For Avenue of Spies: A True Story of Terror, Espionage, and One American Family's Heroic Resistance in Nazi-Occupied Paris…

"Rich in atmosphere and noirish effects, Kershaw’s story centers on the harrowing experience of American-born doctor Sumner Jackson and his family, who undertook dangerous work for the French Resistance." —Boston Globe

"From the opening pages, when Kershaw...drops us into the invasion of Paris, we know that we are in good hands. This is classic narrative nonfiction, constructed and written like a thriller." —Chicago Tribune

"It's the least surprising thing in the world to discover that historian Alex Kershaw's latest book, Avenue of Spies, has already been optioned for development with Sony Pictures TV. Its circumstances — an American family in Paris aiding the French resistance from an apartment only a few doors down from the Paris headquarters of the SS — are too cinematic to ignore." —NPR

"Avenue of Spies provides a lens into the life of a family’s extraordinary espionage efforts...Gripping...and inspiring. This is a powerful book to read anytime, but especially as we mark the 75th anniversary of the Nazi occupation of France." —Missourian

"Brilliantly captures the deadly cat-and-mouse game between Charles de Gaulle's underground and the Nazis and Vichy fascists...Kershaw's sobering look at a family's heroism in one of the history's darkest hours vividly shows what war costs in human terms." —Publishers Weekly

"Kershaw portrays the suspense and terror of this time in the plight of one well-intentioned American-French family caught up in the horror. A tenderly engaging saga of solid research and emotional connection." —Kirkus Reviews

"An intense, moving account that also serves to vividly describe the life of ordinary Parisians under the occupation." —Booklist [starred]

"Written with an engaging and expressive writing style, Kershaw's stirring tale of good and evil in the City of Light will have wide appeal." —Library Journal

"[A] tense and compelling narrative." —BookPage

"With a master storyteller's gift for character, pacing, and heart-stopping detail, Alex Kershaw transports us to wartime Paris, where one American family risked their lives to join the Resistance and defy Hitler. Avenue of Spies is a haunting, harrowing tale that reads like an elegant thriller, with the added benefit that every word is true. I was gripped by the first page to the last." —Karen Abbott, bestselling author of Sin in the Second City and Liar, Temptress, Soldier, Spy

"Avenue of Spies is the best kind of spy story—a true one.  Alex Kershaw has written a heart-rending thriller of espionage set in the darkest shadow of the Holocaust. A powerful story of quiet heroism." —Kai Bird, Pulitzer Prize-winning co-author of American Prometheus and bestselling author of The Good Spy

"Alex Kershaw’s Avenue of Spies is a good book with a good story, but what I like especially about it is that it's an 'Americans abroad' story—Ex-pat Nation is loaded with brave, idealistic people and the Jackson family numbered high among them." —Alan Furst, author of Midnight in Europe

"Avenue of Spies is an unforgettable testament to the power of personal courage and conviction in the face of evil. Sumner Jackson and his family were caught in a vortex of fear and hatred that was as close as a neighbor’s door on Avenue Foch in Paris. They risked everything in the darkest hours of Nazi terror, determined to fight for human dignity and freedom. This is a story of resistance and bravery that is profoundly uplifting." —David E. Hoffman, author of The Billion Dollar Spy and The Dead Hand

"A spellbinding tale of triumph and tragedy. Intimate and terrifying, Avenue of Spies is impossible to put down. This is Alex Kershaw at his best." —Annie Jacobsen, bestselling author of Operation Paperclip

"Avenue of Spies delivers a crisp, pulse-pounding narrative. Kershaw recreates the drama and suspense of war-torn occupied Paris. A taut thriller, the book is centered on an intrepid American family and is filled with a cast of unforgettable characters. Avenue of Spies is like sipping a fine wine: sublime!" —Patrick K. O'Donnell, bestselling author of First SEALs: the Untold Story of the Forging of America's Most Elite Unit​

"Kershaw marries sterling research with first-rate storytelling to put readers on the occupied streets of Paris, looking back over our shoulders in fear. Avenue of Spies is a triumph, an outstanding addition to World War II history." —Gregory A. Freeman, author of The Forgotten 500 and The Last Mission of the Wham Bam Boys

“Kershaw is a master storyteller, and Avenue of Spies, like his previous books, reads like a thriller. From the opening scene…until the final desperate struggle that dominates the narrative’s conclusion, Kershaw has crafted a gripping, taut story that will keep readers turning pages long after they should have turned out the light.” —James Scott, Charleston Post and Courier

ALEX KERSHAW is the New York Times bestselling author of several books on World War II, including The Bedford Boys and The Longest Winter. He lives in Willamstown, Massachusetts.
Loading...
or support indie stores by buying on