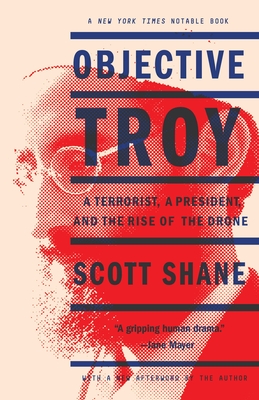 Objective Troy tells the gripping and unsettling story of Anwar al-Awlaki, the once-celebrated American imam who called for moderation after 9/11, a man who ultimately directed his outsized talents to the mass murder of his fellow citizens. It follows Barack Obama’s campaign against the excesses of the Bush counterterrorism programs and his eventual embrace of the targeted killing of suspected militants. And it recounts how the president directed the mammoth machinery of spy agencies to hunt Awlaki down in a frantic, multi-million-dollar pursuit that would end with the death of Awlaki by a bizarre, robotic technology that is changing warfare—the drone.
Scott Shane, who has covered terrorism for The New York Times over the last decade, weaves the clash between president and terrorist into both a riveting narrative and a deeply human account of the defining conflict of our era. Awlaki, who directed a plot that almost derailed Obama’s presidency, and then taunted him from his desert hideouts, will go down in history as the first United States citizen deliberately hunted and assassinated by his own government without trial. But his eloquent calls to jihad, amplified by YouTube, continue to lure young Westerners into terrorism—resulting in tragedies from the Boston marathon bombing to the murder of cartoonists at a Paris weekly. Awlaki’s life and death show how profoundly America has been changed by the threat of terrorism and by our own fears.
Illuminating and provocative, and based on years of in depth reporting, Objective Troy is a brilliant reckoning with the moral challenge of terrorism and a masterful chronicle of our times.

Praise For Objective Troy: A Terrorist, a President, and the Rise of the Drone…

“Mr. Shane performs a valuable service by stripping away many myths that surround Awlaki.” —Max Boot, The Wall Street Journal

“A gripping account of the hunt for Anwar al-Awlaki.” —Foreign Affairs

"Remarkable . . . A dark and fascinating new book . . . Shane’s investigation into what he describes as the president’s radicalization is one of the most thorough and level-headed that has been penned to date . . . A crucial read." —Bookforum

"[Objective Troy] delves deeply into a single life and still comes up with questions. This is perhaps its greatest service. It is an object lesson in the limits of the search for a root cause." —The Washington Post

“An enthralling story. . . . One of the best books on al-Qaeda and the 9/11 era. . . . Shane joins a distinguished list along with Lawrence Wright, Jason Burke and Peter Bergen.” —The Times Literary Supplement

“A fascinating book . . . Shane bases his account on extensive interviews, dogged research, and years spent closely tracking the course of these events, and he poses the important questions of justification, legal and moral, that US actions have provoked.” —Thomas Nagel, The London Review of Books

“A gripping, deeply reported tale of sex, religion, radicalization, and betrayal. In the telling, Shane reveals a strange truth: the key to understanding Awlaki’s actions, and his fate, is recognizing how American his story is . . . The reason we know as much as we do about the killing—and other drone strikes—is because of the efforts of reporters like Scott Shane. Read his book.” —Commonweal

"The story [Shane] tells of Anwar al-Awlaki’s life and death is deeply instructive, as is his account of Barack Obama’s decision-making. Anyone interested in understanding the allure of radical Islam, and thinking about ways to counter it both on and off the battlefield, would do well to study this work." —Gabriel Schoenfeld, The Weekly Standard

"Scott Shane has done a masterful job of fleshing out the missing link in the evolution of Al Qaeda. The life of the American-born imam, Anwar al-Awlaki, serves as a cautionary tale about the conflict between Islam and the West, and about America’s role in the Middle East. Years after his assassination by an American drone strike, Awlaki’s voice continues to summon young Muslims to the fight." —Lawrence Wright

"Scott Shane has written a bracing story about America's most notorious extra-judicial killing, the 2011 drone shot that took out the American-born terrorist preacher Anwar al Alwaki. Here is by far the best reporting on the subject, from Alwaki's gradual evolution into a violent extremist to the Obama administration's internal struggles -- moral and legal -- over how to use the drone, a troubling but undeniably effective new weapon. Thorough and exceedingly fair, chocked with surprising detail, Objective Troy asks all the right questions, and will leave any reader wondering whether the United States, just because it can remotely assassinate terror threats, should." —Mark Bowden

"No one has written a better book about Obama's war against terrorists. Shane is a superb reporter and a wonderful story teller. I literally could not out this book down. It will join a short list of books that helps all of us to really understand the wars against terrorist groups that have defined US foreign policy since 9/11." —Peter Bergen

“Scott Shane has written a 21st century morality tale about a president steeped in Constitutional law and his hunt for a charismatic American terrorist—who just happens to be a ‘skirt-chasing mullah.’ But this murder mystery is alarmingly all true. The writing is riveting, the intelligence sources are impeccable and the book is quietly elegant—echoing the human story told in Lawrence Wright’s The Looming Towers. Shane's Objective Troy is destined to become a classic text on both the Obama Presidency and drone warfare.” —Kai Bird

Scott Shane is unsurpassed in shedding clear light on America's darkest secrets, including the gripping human drama behind a drone strike that changed history. It's a story that had to be told, and must be read." —Jane Mayer

Scott Shane is a national security reporter for The New York Times based in Washington, DC, where he has worked for over a decade.
Loading...
or
Not Currently Available for Direct Purchase