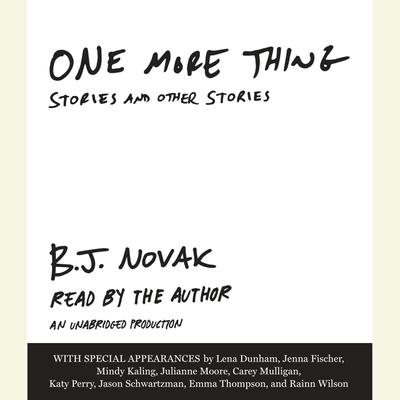 Stories and Other Stories

B.J. Novak's One More Thing: Stories and Other Stories is an endlessly entertaining, surprisingly sensitive, and startlingly original debut that signals the arrival of a brilliant new voice in American fiction.

A boy wins a $100,000 prize in a box of Frosted Flakes—only to discover how claiming the winnings might unravel his family. A woman sets out to seduce motivational speaker Tony Robbins—turning for help to the famed motivator himself. A new arrival in Heaven, overwhelmed with options, procrastinates over a long-ago promise to visit his grandmother. We also meet Sophia, the first artificially intelligent being capable of love, who falls for a man who might not be ready for it himself; a vengeance-minded hare, obsessed with scoring a rematch against the tortoise who ruined his life; and post-college friends who try to figure out how to host an intervention in the era of Facebook.  Along the way, we learn why wearing a red T-shirt every day is the key to finding love, how February got its name, and why the stock market is sometimes just . . . down.

Finding inspiration in questions from the nature of perfection to the icing on carrot cake, One More Thing has at its heart the most human of phenomena: love, fear, hope, ambition, and the inner stirring for the one elusive element that might just make a person complete. Across a dazzling range of subjects, themes, tones, and narrative voices, the many pieces in this collection are like nothing else, but they have one thing in common: they share the playful humor, deep heart, sharp eye, inquisitive mind, and altogether electrifying spirit of a writer with a fierce devotion to the entertainment of the reader.

B.J. Novak is a writer and actor best known for his work on NBC’s Emmy Award-winning comedy series The Office as an actor, writer, director, and executive producer. He is also known for his stand up comedy performances and his roles in motion pictures such as Quentin Tarantino’s Inglourious Basterds and Disney’s Saving Mr. Banks. He is a graduate of Harvard University with a degree in English and Spanish literature.