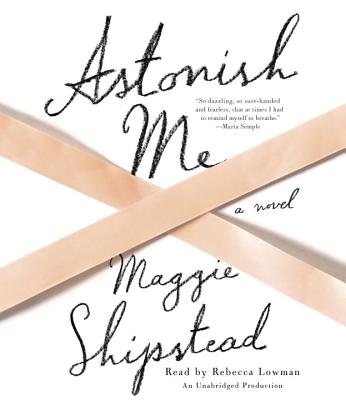 From the author of the widely acclaimed debut novel Seating Arrangements, winner of the Dylan Thomas Prize and the Los Angeles Times Book Prize for First Fiction: a gorgeously written, fiercely compelling glimpse into the demanding world of professional ballet and its magnetic hold over two generations. Astonish Me is the irresistible story of Joan, a young American dancer who helps a Soviet ballet star, the great Arslan Rusakov, defect in 1975. A flash of fame and a passionate love affair follow, but Joan knows that, onstage and off, she is destined to remain in the background. She will never possess Arslan, and she will never be a prima ballerina. She will rise no higher than the corps, one dancer among many.
After her relationship with Arslan sours, Joan plots to make a new life for herself. She quits ballet, marries a good man, and settles in California with him and their son, Harry. But as the years pass, Joan comes to understand that ballet isn't finished with her yet, for there is no mistaking that Harry is a prodigy. Through Harry, Joan is pulled back into a world she thought she'd left behind--back into dangerous secrets, and back, inevitably, to Arslan. Combining a sweeping, operatic plot with subtly observed characters, Maggie Shipstead gives us a novel of stunning intensity and deft psychological nuance. Gripping, dramatic, and brilliantly conjured, Astonish Me confirms Shipstead's range and ability and raises provocative questions about the nature of talent, the choices we must make in search of fulfillment, and how we square the yearning for comfort with the demands of art. From the Hardcover edition.

Praise For Astonish Me…

MAGGIE SHIPSTEAD was born in 1983 and grew up in Orange County, California. Her highly acclaimed debut novel, Seating Arrangements, was a national best seller and the winner of the Dylan Thomas Prize as well as a finalist for the Flaherty-Dunnan First Novel Prize. She is a graduate of the Iowa Writers' Workshop and a former Wallace Stegner Fellow at Stanford. In winter 2012, she was a resident at the Cite Internationale des Arts in Paris. Her writing has appeared in The New York Times, The San Francisco Chronicle, Tin House, The Paris Review Daily, The Virginia Quarterly Review, American Short Fiction, The Best American Short Stories, and elsewhere. Her story "La Moretta" was a 2012 National Magazine Award finalist.
Loading...
or
Not Currently Available for Direct Purchase