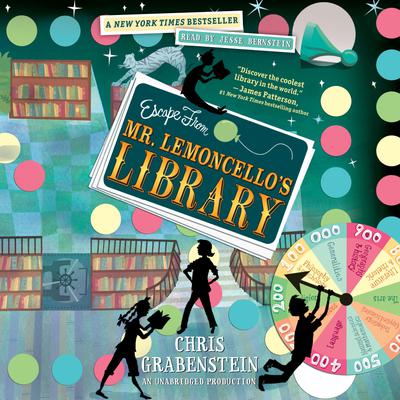 Charlie and the Chocolate Factory meets A Night in the Museum in this action-packed New York Times Bestseller from Chris Grabenstein, coauthor of I Funny, Treasure Hunters and other bestselling series with James Patterson!

Kyle Keeley is the class clown and a huge fan of all games—board games, word games, and particularly video games. His hero, Luigi Lemoncello, the most notorious and creative gamemaker in the world, just so happens to be the genius behind the construction of the new town library. Lucky Kyle wins a coveted spot as one of twelve kids invited for an overnight sleepover in the library, hosted by Mr. Lemoncello and riddled with lots and lots of games. But when morning comes, the doors stay locked. Kyle and the other kids must solve every clue and figure out every secret puzzle to find the hidden escape route!

44 STATE AWARD LISTS AND COUNTING -- INCLUDING THE SUNSHINE STATE AWARD!

Starred Review, Booklist
* “An ode to libraries and literature that is a worthy successor to the original madman puzzle-master himself, Willy Wonka.”

Starred Review, Kirkus Reviews
*"Full of puzzles to think about, puns to groan at . . . this solid, tightly plotted read is a winner for readers and game-players alike."

CHRIS GRABENSTEIN is the co-author (with James Patterson) of the #1 New York Times Bestseller I FUNNY. Winner of one Anthony and three Agatha Awards for his spooky and funny Haunted Mystery series, Chris has written over twenty books, a stage play, scripts for Jim Henson's Muppets, and the CBS-TV movie The Christmas Gift, starring John Denver. A former advertising executive and improvisational comedian, he lives in New York City with his wife, three cats, and a rescue dog named Fred who starred on Broadway in Chitty Chitty Bang Bang.