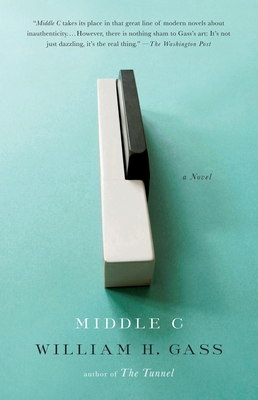 In a series of brilliant variations, William Gass presents a man’s life—futile, comic, anarchic—arranged in an array of vocabularies, altered rhythms, forms, and tones, with music as both theme and structure.

It begins in Graz, Austria, in 1938, when Joseph Skizzen’s father pretends to be Jewish and emigrates to avoid the Nazis. In London with his wife and children for the duration of the war, he mysteriously disappears and the rest of the family relocates to a small town in Ohio. Here Joseph Skizzen grows up and leads a resolutely ordinary life, but one that is built on a scaffold of forgery and deceit. Outwardly he is a professor of music at a mediocre college; secretly he is the earnestly obsessive curator of a private Inhumanity Museum, meant to contain the guilt of centuries of atrocities. Middle C tells the story of his journey—a story that is also an investigation into the nature of identity and the ways in which each of us is several selves.

“Middle C takes its place in that great line of modern novels about inauthenticity. . . . However, there is nothing sham to Gass’s art: It’s not just dazzling, it’s the real thing.” —The Washington Post

“A world-devouring novel. . . . Of all living literary figures, William Gass may count as the most daringly scathing and most assertively fecund: in language, in ideas, in intricacy of form; above all in relentless fury. . . . This unquiet bildungsroman is designed to detonate its mild, middling title. . . . Exhilaratingly ingenious . . . unexpected and dizzying.” —Cynthia Ozick, The New York Times Book Review

“Rhythmic and sonic. . . . A final statement of Gass’s belief in the sound of literary language.” —The Times Literary Supplement (London)

“Gass is a magician of the word, the writer of a prose so rich that it makes Vladimir Nabokov’s seem impoverished. . . . Metaphors leap through hoops, similes elicit oohs and ahs, and daredevil paragraphs bring down the house. There’s never any fat or slack to his sentences, though sometimes they unfold quietly, almost slyly, until blossoming into little stories all their own.” —The Washington Post

“Middle C is driven by plot, by a largely comic chain of cause and consequence. . . . Skizzen proves as befuddled an academic wanderer as anyone this country has seen since Nabokov’s Timofey Pnin.” —The New York Review of Books

“A mischievous variation on the moral dilemmas raised in Gass’s The Tunnel . . . In this exuberantly learned bildungsroman—this torrent of curious facts and arch commentary, puns and allusions—internationally lauded virtuoso Gass reflects on humanity’s crimes and marvels, creating his funniest and most life-embracing book yet.” —Booklist (starred)

“Extraordinary. . . . A religious allegory and a philosophical meditation on language and consciousness as the source of evil.” —The Boston Globe

“Gass orchestrates his fiction with thematic elements as a composer might a symphony.” —Timeout  New York

“A masterly work of language and imagery from one of America’s most celebrated authors.” —Library Journal (starred)

“Engaging, melancholy. . . . Gass remains a master of apt metaphors, graceful sentences and a flinty, unforgiving brand of humor; it may be the most entertaining novel you’ll read that half wishes humanity was wiped off the map. . . . Gass, now 88, clearly has endings on his mind, which he addresses with fearsome brio and wit.” —Kirkus

William H. Gass—essayist, novelist, literary critic—was born in Fargo, North Dakota. He is the author of seven works of fiction and nine books of essays, including Life Sentences, A Temple of Texts, and Tests of Time, and was a professor of philosophy at Washington University. He died in 2017.