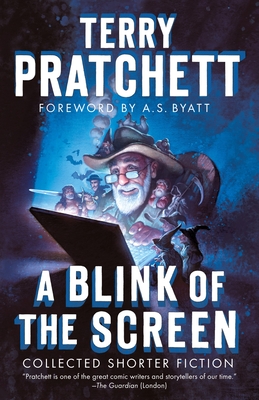 A Blink of the Screen

The first career-spanning collection of short fiction by Sir Terry Pratchett—one of the most beloved and bestselling writers of our time—A Blink of the Screen charts the development of Pratchett’s creative vision throughout his prolific career, from his early writings in school to the dizzy mastery of the phenomenally successful Discworld series. Along the way we are introduced to the first published pieces from Pratchett’s stint as a young journalist, the experimental stories that originated his later works, and the lyrics to the national anthem of Ankh-Morpork, among other treats. Here, readers will find new and unfamiliar characters and fictional worlds alongside well-known ones. They will also find adventure, chickens, death, disco, and, actually, some quite disturbing ideas about Christmas, all infused with Pratchett’s inimitable brand of humor and energy.


Praise For A Blink of the Screen: Collected Shorter Fiction…

“A book meant to be cherished.” —The New York Times Book Review

“Some writers simply possess the Gift. No matter what they bring out. . . . That’s certainly the case with Terry Pratchett.” —The Washington Post Book World

“In the history of comic fantasy, Pratchett has no equals for invention or for range.” —The Wall Street Journal

“Pratchett is one of the great comic writers and storytellers of our time.” —The Guardian

“One of the giants in the world of fantasy literature.” —New York Daily News

“You can’t call what Pratchett does satire—it’s far too good-natured for that—but he has a satirist’s instinct for the absurd and a cartoonist’s eye for the telling detail.” —The Daily Telegraph (London)

“A short story collection covering the entire career of one of our most prolific, and beloved, fantasy writers. . . . One of the main draws of [A Blink of the Screen] for serious fans, or aspiring writers, will be the chance to trace the evolution of Pratchett’s craft—but there’s plenty here for readers who have never heard of him to enjoy.” —Kirkus Reviews

“A little absurdism, a little wordplay, a lot of inventive fantasy, a lot of heart, and a deep-seated fascination with the way technologies change societies. . . . Pratchett can easily fill an entire bookcase by himself. . . . But he has kept the piquant sense of someone playing with language, with new worlds, and with the familiar old tropes that he enjoys upending.” —NPR

“What Pratchett does is not just great, but unparalleled. In five hundred years, it won’t be the Nobel laureates who are being studied. It’s going to be this guy.” —Brandon Sanderson, Tor.com

“One of the greatest comic novelists of all time, in his way the equal of Wodehouse and Waugh.” —GQ (UK)

“The master of humorous fantasy . . . [Pratchett] should be recognized as one of the more significant contemporary English-language satirists.” —Publishers Weekly

TERRY PRATCHETT is the acclaimed creator of the globally bestselling Discworld series, the first of which, The Color of Magic, was published in 1983. In all, he is the author of more than seventy books. His novels have been widely adapted for stage and screen, and he was awarded multiple prizes over the course of his career, including the Carnegie Medal, as well as a knighthood for services to literature. Worldwide sales of his books now stand at more than 85 million (but who’s counting?), and they have been published in thirty-eight languages. He died in 2015.
Loading...
or support indie stores by buying on