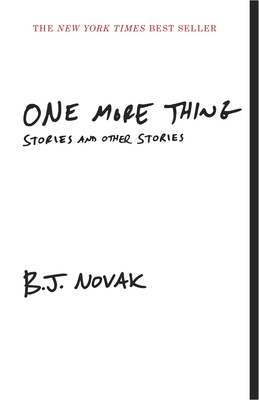 Stories and Other Stories (Vintage Contemporaries)

A startlingly original debut from the actor, writer, director, and executive producer hailed as “a gifted observer of the human condition and a very funny writer capable of winning that rare thing: unselfconscious, insuppressible laughter” (The Washington Post).

Praise For One More Thing: Stories and Other Stories (Vintage Contemporaries)…

"B.J. blew me away. He just keeps kicking short fiction in the rear, making it run ahead clutching its ass, and then he runs up and kicks it some more, and the result is one of the most aggressively, insanely awesome debuts in a while." —Gary Shteyngart, author of Super Sad True Love Story

B.J. Novak is perhaps best known for his work as a writer, actor, director, and executive producer on NBC’s Emmy Award-winning comedy series The Office. He is also known for his stand up comedy performances and his roles in motion pictures such as Quentin Tarantino’s Inglourious Basterds and Disney’s Saving Mr. Banks. He is the author of The Book With No Pictures, a #1 New York Times Bestseller, and his stories have been published in The New Yorker and featured on This American Life.
Loading...
or support indie stores by buying on