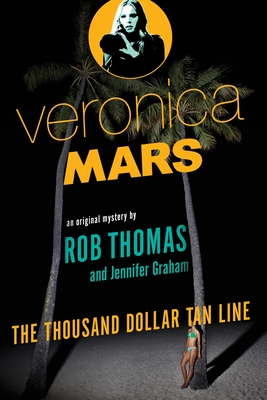 From Rob Thomas, the creator of the television series and movie phenomenon Veronica Mars, comes the first book in a thrilling mystery series that picks up where the feature film left off.

Ten years after graduating from high school in Neptune, California, Veronica Mars is back in the land of sun, sand, crime, and corruption. She’s traded in her law degree for her old private investigating license, struggling to keep Mars Investigations afloat on the scant cash earned by catching cheating spouses until she can score her first big case.

Now it’s spring break, and college students descend on Neptune, transforming the beaches and boardwalks into a frenzied, week-long rave. When a girl disappears from a party, Veronica is called in to investigate. But this is no simple missing person’s case; the house the girl vanished from belongs to a man with serious criminal ties, and soon Veronica is plunged into a dangerous underworld of drugs and organized crime. And when a major break in the investigation has a shocking connection to Veronica’s past, the case hits closer to home than she ever imagined.

In Veronica Mars, Rob Thomas has created a groundbreaking female detective who’s part Phillip Marlowe, part Nancy Drew, and all snark. With its sharp plot and clever twists, The Thousand-Dollar Tan Line will keep you guessing until the very last page.

A Time, Entertainment Weekly, and Salon Best Show of the Year

"Best. Show. Ever. Seriously, I've never gotten more wrapped up in a show I wasn't making, and maybe even more than those. . . . These guys know what they're doing on a level that intimidates me. It's the Harry Potter of shows." —Joss Whedon, creator of Buffy and writer/director of Marvel's The Avengers

“Sharp wits, steely nerves, and a wicked sense of humor. . . . This is one TV case we don’t want to see closed.”—USA Today

“It’s what lies deeper that not only makes the show remarkable but what defines it. Mysteries are its central metaphor; Veronica solves little puzzles because she, like all of us, cannot unravel the bigger ones. . . . Filled with deft, glorious wit.” —Entertainment Weekly

Jennifer Graham graduated from Reed College and received her MFA from the University of Texas at Austin. Her short stories have appeared in The Seattle Review and Zahir. She currently lives in Austin with her husband.
Loading...
or
Not Currently Available for Direct Purchase