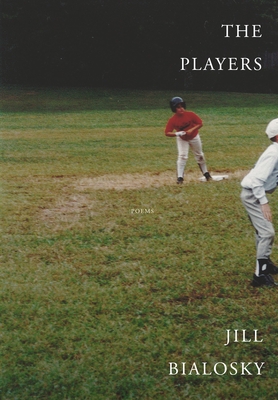 The strongest collection yet from this widely praised poet is about the central players in our lives, our relationships over time—between mother and son, mother and daughter—and how one generation of relationships informs and shapes the next.

The opening sequence, “Manhood,” looks at the insular world of baseball, shedding light on the complexities of gender, boyhood, and coming-of-age. The poet captures the electrifying, proud language of baseball talk, channeling the tone and approach of the young men she observes as a mother, and bringing poignancy and deeper understanding to the transaction between herself and the young men she sees growing into adulthood. “American Comedy” is a sonnet sequence about the absurdities and realities of modern domestic life, while figures in literature are the players in “Interlude.” The final section, “The Players,” becomes a forceful and searing revelation about the legacy of generations.  Exploring the nature of attachment on many levels, The Players brings us Jill Bialosky at her best, in poems that find a new language to describe the rich and universal story that is modern motherhood.


Praise For The Players: Poems…

“Even sparer than its clean, forthright predecessors, Bialosky’s fifth collection of poems takes cues from the laconic dicta of baseball. “If I say slide, get dirty. / If I say stay, don’t run,” she writes, in “Manhood.” Many poems are written in the first-person plural, with mothers, fathers, and sidelined girls forming wistful choruses on the finitude of summer, the game, and affections. Flashes of dark humor embedded in prim lists call to mind Marianne Moore or James Schuyler…”--The New Yorker

“A fresh, inviting collection that explores the mother-son relationship and family dynamics. The book begins with a wonderful series of poems that capture the language and rhythms of baseball and show how the game teaches boys about manhood. Everyone has a role to play, whether on the field or in the stands, and as the drama unfolds, adolescents grow toward independence.”--Elizabeth Lund, The Christian Science Monitor

“Rarely has there been a book of poetry that so wistfully, so vividly evokes that season we yearn for all winter long—and you know we mean summer. Baseball, barbecues, surfers, black-eyed Susans—so close we can almost feel them here on the pages of Jill Bialosky's elegiac new collection.”— Leigh Haber—Oprah.com


“With pitch-perfect, plain-spoken eloquence, Jill Bialosky appears, on the one hand, to be offering in The Players a series of amiable, perceptive, playful coming-of-age scenarios, many involving a boy who, through the rite of playing baseball in the context of his cohort, his family, and his community, grows into young manhood. On the other hand, Bialosky is giving us… something else, something more — an entire discerned cycle of romance, hope, dream, striving, loss, and recompense, played out in and across family, time, and place”—Lisa Russ Spaar—By the Seawall

“Jill Bialosky’s The Players captures the essence of Americana in her baseball poems, in her descriptions of the beach, nature, small-town life, motherhood, and parents. Her true subject is the inevitability of loss, which includes children growing up and leaving, the death of a parent…Most poignant and true are poems about a son who has turned into an adolescent, especially “Perspective,” with its lovely lyrical refrain…Through close observation of her world, Ms. Bialosky conveys both the ordinariness and the extraordinariness of life.”--East Hampton Star


"[The Players] is a heartfelt ode to the American suburbs and countryside [exploring] the complexities of interpersonal, particularly familial, relationships. . . Bialosky isn’t afraid to acknowledge life’s transience or its beauty, and she excels at both."--Publishers Weekly

“With its thematic sequences, straightforward vocabulary, and broadly appealing subjects, ‘The Players’ is an accessible collection of quality. If you've wanted to try or get back into contemporary poetry but have been afraid of getting stuck in something hermetic, here's an excellent choice for you.”--Jim Higgins, Milwaukee Journal-Sentinel

“So alive and stirring are these poems of boys ripening into men as they perform a ritual of skill and competition, the lyrics gather force and dynamism like music—think Gershwin, think Copland. These summer poems convey a wondrously intimate grandeur as Bialosky captures the pivots and pitches, lunges and slides, and the quick, cutting rhythms of game talk. Here, too, are the baselines of family, the scorekeeping of community, the perfect mesh of body and mind . . . . Bialosky writes poignantly of the seashore, of life sweeping in and rushing out as a woman cares for her increasingly frail, forgetful mother while watching her son shed childhood. A sun-spangled and deep-shadowed collection in which the archetypal is laced tightly into precious, ordinary life. —Booklist

“In a golden age of motherhood poems––and this is certainly one such age––what can be left to say? Remarkable, then, that Jill Bialosky should make the mode so fresh. Poetry’s two great subjects, love and mortality, are here made one, and every inflection known to words––hilarity and sorrow, ruefulness and joy––has found its prompting here. Nothing known to a boy on the cusp of manhood, to one beloved boy on the cusp of manhood, is beyond the reach of Bialosky’s resilient imagination. That reach extends to comrades in the dugout, coaches on the baseline, parents in their partisan furies, parents of parents in varying states of departure: everyone’s a player in this elegant and generous book.”––Linda Gregerson

“Baseball is portrayed in these radiant new poems by Jill Bialosky as a ‘fierce and feral’ rite of passage in which we're all held hostage to the always surprising vicissitudes of time and change. The Players stakes a claim to a landscape all its own, one in which a profound and beautiful respect for human vulnerability is evident. I was both riveted and moved.”––Philip Schultz

“Jill Bialosky’s new book The Players will surely be read and gifted by many. It’s easy to imagine a friend handing a copy to another friend and saying, “It’s about us.” The players are mothers and sons primarily, but certainly with sufficient evidence of fathers and the likely others. This could be ordinary, but it is not. Sometimes the lines ring like bells. Sometimes we recognize the wanderings and wonderings of the very private, usually unheard mind. In such ways the poems reveal the endeavors and joys of being this most central of things—a family.”—Mary Oliver

JILL BIALOSKY is the author of three previous poetry collections, The End of Desire, Subterranean, and Intruder. Her poems have appeared in journals such as The Paris Review, The Kenyon Review, The New Yorker, and The Atlantic Monthly. She is also the author of several novels and the recent memoir History of a Suicide: My Sister's Unfinished Life. An editor at W. W. Norton, she lives in New York City.

www.jillbialosky.com
Loading...
or
Not Currently Available for Direct Purchase