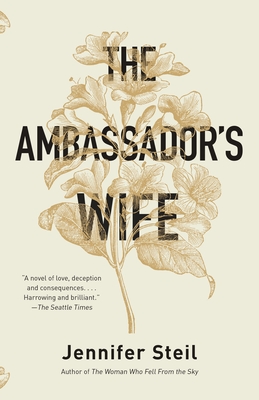 When bohemian artist Miranda meets British ambassador Finn in the ancient stone streets of an Islamic city, the course of her life alters in extraordinary ways. Their marriage gives her the luxury to paint whenever she wants, a staff to wait on her, and a young daughter she adores, but she loses the freedom to wander where she likes and to meet the Muslim women she is secretly teaching to paint. Her husband also makes Miranda a target: One sunny afternoon while hiking in the mountains, she is brutally kidnapped.

As Finn struggles to save his family and his career, and Miranda grows close to a stranger’s child in captivity, the secrets he and Miranda have each sought to hide place them and those who trust them in peril. Not even freedom could restore the happiness that once was theirs.


Praise For The Ambassador's Wife: A Novel…

“A novel of love, deception and consequences. . . . Richly imagined. . . . Harrowing and brilliant.”
—The Seattle Times

“Thrillingly suspenseful and deeply sensuous. . . . Steil deftly conducts us into the private and public rooms of the diplomatic world, the complicated aspirations of modern young women living behind the veil, the unfolding of a very private love story—and best of all, into the consciousness of the fiery and idiosyncratic artist who becomes the ambassador’s wife. Captivating, unforgettable.”
—Janet Fitch, author of White Oleander

“While the story may resonate in a special way for the wanderers among us, this book is for every reader looking to disappear into a well-crafted and winding story. . . . [Steil has] a gift for writing inner conflict just as engaging as the visible kind.”
—Chicago Literati

“A gritty and ground-level thriller by an author who is herself the wife of a diplomat,”
—Literary Hub

“A fast-paced novel of marital love and the bonds of women’s friendships against the backdrop of intrigue in the Middle East.”
--Booklist

“Jennifer Steil’s memorable heroine confronts the confines of privilege, the fear of death, the temptations of the white savior complex, and the limits of cross-cultural connection in this detailed, thoughtful debut.”
—Joy Castro, author of Island of Bones

“The Ambassador’s Wife illuminates a very intimate, and feminine, face of terror. Jennifer Steil has lived among artists, journalists, diplomats, and women desiring empowerment in one of the most terror-ridden corners of the Middle East. This is a story only she can tell, and she does so with great clarity, phenomenal insight, and wondrous grace. The rarest of books, this is a thriller about the heart.”
—Moira Crone, author of The Ice Garden

“Be warned: once you embark on this hypnotic magic carpet ride of a book, you won’t be able to stop. Jennifer Steil is a modern-day Scheherazade, who seamlessly weds lyricism, mystery and a reporter’s eye for detail. The Ambassador’s Wife is as deeply compassionate as it is thrilling.”
—Jillian Lauren, author of Some Girls: My Life in a Harem

“An extraordinarily timely tale, completely gripping. . . . So much of the background, too, was familiar to me as a diplomat’s wife. I loved the book. I wish I had written it!”
—Brigid Keenan, author of Diplomatic Baggage: The Adventures of a Trailing Spouse

Jennifer Steil is the author of The Woman Who Fell from the Sky, a memoir about her experiences running a newspaper in Yemen. She lives in Bolivia, where her husband is the European Union ambassador.