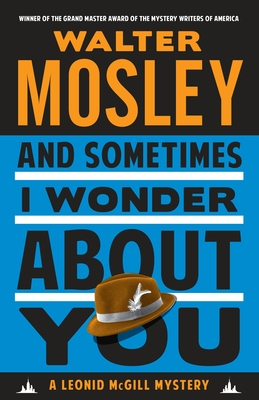 And Sometimes I Wonder About You

P.I. Leonid McGill isn’t usually one to refuse a case. But when Hiram Stent, a man down on his luck, begs him to find a cousin who is about to inherit millions of dollars, he senses something fishy. His instincts prove right: The night after he turns Hiram away, Hiram is found dead and Leonid’s office is broken into. Feeling partly responsible for this bizarre turn of events, Leonid is forced to open an investigation that will pull him into the lurid history of an old-money New York family.

Leonid’s personal life is no less troubling. As his wife recovers in an uptown sanatorium from a suicide attempt, his mistress’s conscience kicks in. To further complicate matters, the stunning Marella Herzog, as irresistible as she is dangerous, walks into his life—the perfect wrong woman at just the right time.

Praise For And Sometimes I Wonder About You: A Leonid McGill Mystery…

Praise for Walter Mosley and And Sometimes I Wonder About You:

“Why the devotion? To begin with, McGill is one of the most humane (and likable) P.I.s in the business. . . . With Mosley, there’s always the surprise factor—a cutting image or a bracing line of dialogue.” —The New York Times Book Review

“Like the city he works in, and the Mosley books he inhabits, Leonid McGill is complicated, savvy, and full of surprises: a would-be champ who can’t win for losing, a fighter who can never be counted out.” —The Wall Street Journal

“The crime novels of Walter Mosley are first and foremost crackling good stories, full of mystery, suspense, and prose like good soul food: hearty, stick-to-your-ribs sentences with a spicy aftertaste.” —The Washington Post

“If you didn’t know any better, you’d think it was Mosley, not McGill, who’s the former boxer—the way he bobs and weaves from chapter to chapter, sidestepping deadly blows and delivering his own devastating combinations. . . . There’s no one who can touch him.” —The Toledo Blade

“Outstanding. . . . Mosley’s sharp ear for dialogue and talent for sketching memorable characters are much in evidence in this installment, further deepening his complex lead.” —Publishers Weekly (starred review)

“When it comes to great books, here’s an easy rule of thumb: Never miss Mosley. . . . Leonid McGill should be appreciated.” —BookPage

“No-one alive writes like Mosley. He is a multi-talented man of letters, but is unique in that he weaves poetry into every page. . . . This is Mosley at his best, with not one word wasted, and a story which will leave you with much to think about.” —Crime Fiction Lover

Walter Mosley is the author of more than fifty books, most notably thirteen Easy Rawlins mysteries, the first of which, Devil in a Blue Dress, was made into an acclaimed film starring Denzel Washington. Always Outnumbered, adapted from his first Socrates Fortlow novel, was an HBO film starring Laurence Fishburne. Mosley is the winner of numerous awards, including an O. Henry Award, a Grammy Award, a PEN America Lifetime Achievement Award, a Langston Hughes Medal, and a Mystery Writers of America Grand Master Award. A Los Angeles native and a graduate of Goddard College, he holds an MFA from CCNY and now lives in Brooklyn, New York.

www.waltermosley.com
Loading...
or support indie stores by buying on