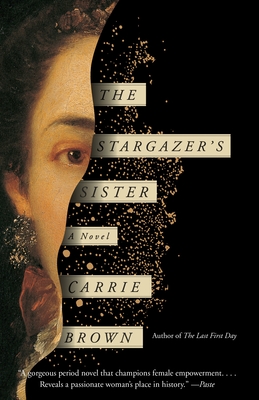 Caroline, known as “Lina” to her family, has always lived in the shadow of her older brother William Herschel’s accomplishments. And yet when William invites Lina to join him in England to assist in his musical and astronomical pursuits—not to mention to run his bachelor household—she accepts, finding a new sense of purpose. William may be an obsessive genius, but Lina adores him, and aids him with the same fervency as a beloved wife.

When William decides to marry, however, Lina’s world collapses. As she attempts to rebuild a future, we witness the dawning of an early feminist consciousness—a woman struggling to find her own place among the stars.


Praise For The Stargazer's Sister: A Novel…

“Brown’s writing is as luminous as the skies her characters contemplate.” —Caroline Leavitt, Boston Globe

“Intriguing.... A love story … but unusual in being about a brother and sister, and what they accomplished together.” —Andrea Barrett, The Washington Post

“A lovely addition to Carrie Brown’s works of historical fiction. Brown brings the true story of the Herschel siblings to life in exquisite detail and deftly explores what it meant for Caroline to be an intelligent woman far ahead of her time.” —BookPage

“Quoting the Royal Astronomical Society’s motto, Lina tells a youngster, ‘Let whatever shines be noted.’ With her novel, Brown does just that.” —Minneapolis Star Tribune

“A haunting evocation—actual and imagined—of the life of Caroline ‘Lina’ Herschel, the younger sister of the eighteenth-century astronomer William Herschel. The tale is deeply satisfying, a testament to Carrie Brown’s seductive voice and her ability to translate Lina’s deep emotional life in all its complexity, both joyful and heartbreaking. I love this book, a wonderful adventure and a resonating example of the difficulties faced by so many women for so very long.” —Robb Forman Dew, National Book Award–winning author of Dale Loves Sophie to Death

“With a calm, polished style that suits its protagonist, the novel brings to life both sister and stargazer . . . shining like a pair of binary stars in orbit together.”
—Kansas City Star

“A spellbinding account of two lives intertwined and bolstered by awe.” —Shelf Awareness

“Wonderfully written with keen insight into the obsessive, almost marital relationship between Lina and William, The Stargazer’s Sister offers us a glimpse of the limited world offered to women of intelligence in earlier times.” —Historical Novels Review

“Rich and multi-layered, this love story of a sister and her brother is always a pleasure to read, providing us with a fascinating glimpse into a life that changed our understanding of the cosmos and our place within it. Brown excels in showing us how Lina Hershel left her indelible mark on science, one that is greatly enhanced with startling promise, more than anyone could have possibly imagined considering the time period in which she lived.” —Curled Up With a Good Book

“The reader is privy to Caroline’s childhood of abuse and illness, her loneliness in spite of her closeness to her brother, and her unrelenting labor (working day and night) in service of his work as an astronomer. As with Anthony Doerr’s All the Light We Cannot See, the beautiful rests alongside the sad providing a complex, interesting portrait of a life.”  —Ploughshares

Carrie Brown is the author of seven novels and a collection of short stories. She has received many honors for her work, including a National Endowment for the Arts fellowship, the Barnes & Noble Discover Great New Writers Award, the Janet Heidinger Kafka Prize, the Great Lakes Book Award, and the Annual Library of Virginia Literary Award (twice). Her short fiction and essays have appeared in many literary journals. She and her husband, the novelist John Gregory Brown, live in Massachusetts, where they teach at Deerfield Academy.