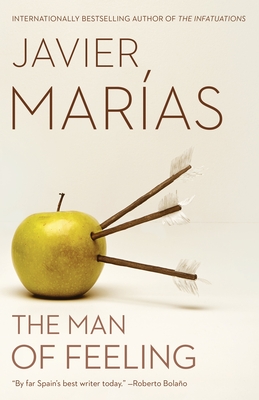 The Man of Feeling (Vintage International)

A story of love and memory.

On a train journey from Paris to Madrid a young opera singer becomes fascinated by those in his compartment: a middle-aged businessman, his alluring wife and their male traveling companion. Soon his life of constant travel, luxury hotels, rehearsal and performance will become entangled with these three people, and the singer will find himself fatefully consumed by Natalia's beauty. The Man of Feeling is the haunting story of the birth and death of a passion, told in retrospect. Intricately interweaving desire and memory, it explores the nature of love, and asks whether we can ever truly recall something that no longer exists.

Praise For The Man of Feeling (Vintage International)…

"The most subtle and gifted writer in contemporary Spanish literature." –The Boston Globe

"A digressive narrative that moves back and forth in time....There is nothing quite like it in fiction today."--The New York Times Book Review

“Marias’s literary gamesmanship evokes verbal puzzle-makers like Borges, and his ingenious chessboard plots bring to mind the 20th century's grand-master strategist, Vladimir Nabokov. Yet his style is uniquely his own as are the discoveries he makes while rummaging around in the basement of the human heart.”—Los Angeles Times

"A book that reflects the torture of love the way arias reflect heartbreak."--Washington Times

“The unspoken romance at the heart of Marías’s work is the recuperation of old-fashioned adventure within perfectly serious, cerebral contemporary fiction.”—The Daily Beast

“Marías has defined the ethos of our time.”—The Guardian, UK

“Beyond the interesting ideas his work draws on, Marías’s novels are simply a pleasure to read.”—The Millions

Javier Marías was born in Madrid in 1951. The recipient of numerous prizes, including the International IMPAC Dublin Literary Award and the Prix Femina Étranger, he has written thirteen novels, three story collections, and nineteen works of collected articles and essays. His books have been translated into forty-three languages, in fifty-two countries, and have sold more than seven million copies throughout the world.
Loading...
or
Not Currently Available for Direct Purchase