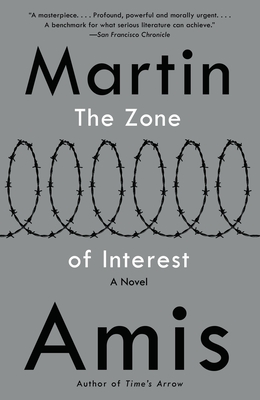 The Zone of Interest (Vintage International)

“Powerful and electric. . . . A book that may stand for years as the triumph of his career.” —NPR

“This is a novel that will endure. . . . A novel whose adventurousness is at the level of its ethical register, its attempt . . .  to imagine the unimaginable.” —The Guardian (London)

“A tour de force of sheer verbal virtuosity, and a brilliant, celestially upsetting novel inspired by no less than a profound moral curiosity about human beings.” —Richard Ford

“Signature Amis at his most inventive. . . . It is precisely through such inspired and irreverent fluency that his dead-serious purpose is realized.” —The Washington Post

“The Zone of Interest harrows in the true sense of the word, churning up our preconceptions and assumptions. It is a work of artistic courage, chilling comedy and incontestable moral seriousness.” —Financial Times

“Heartbreaking. . . . [Amis is] a virtuosically vivid writer.” —The Atlantic

“His finest so far. . . . Astonishing. . . . A tragicomic moral blowtorch worthy of Swift.” —The Daily Beast

Praise For The Zone of Interest (Vintage International)…

“I was riveted by Martin Amis’s The Zone of Interest, with its daring projection into the mind and ‘heart’ of a character . . . It felt like a fitting way to spy on historical events that are impossible to look at but that must, nevertheless, always be kept in sight.” —John Colapinto, The New Yorker

“[A] serious and diligently researched work with a streak of deadpan humor that reframes, and reemphasizes, the horror at hand.” —Entertainment Weekly

“Returning to the Holocaust—the subject of Time’s Arrow, still among [Amis’s] best books—Amis seems greatly energized, addressing the most serious theme with rigour, sophistication, and, most astonishingly, wit.” —The Village Voice

“[Amis] is still the scourge of cliché and the supreme man of letters. . . . Dazzl[es] us once more with verbal dexterity and gutsy inventiveness.” —Minneapolis Star Tribune

“[A] pulverizing novel about identity and humanity. . . in equal measure funny and crushing, with emphasis on how chaos and mass psychosis act on the souls living through it.” —The Miami Herald

“Moving. . . . Genius. . . . Capture[s] that contrast between frivolity and horror with elegance and irony.” —St. Louis Post-Dispatch

“An important book—relentless, excoriating, blisteringly well-written. . . . Mr. Amis is one of our most accomplished writers. . . . Fiercely sharp-witted, his writing has the capacity to be so unique and dexterous as to create the impression he works from some higher alphabet than the rest of us.” —Pittsburgh Post-Gazette

“Displays both restraint and humanity. . . . Takes on themes of immense gravity. . . . Martin Amis isn’t new to the business of turning the horrors of history into fiction, but he has never done so more thoughtfully than in this disquieting novel. . . . He has confronted its challenges with honour and delicacy.” —The Times Literary Supplement (London)

“As good as anything Amis has written since London Fields (1989), and one he obviously felt compelled to write. He has done his subject justice.” —The Spectator

“Highly cerebral and innovative, and also human, humane—even humbling—this is a brave, inquiring work from a literary maverick whose biggest problem as an artist has been his rampaging talent. He has certainly harnessed it here.” —The Irish Times

Martin Amis is the author of thirteen previous novels, the memoir Experience, two collections of stories, and six nonfiction books. He lives in Brooklyn, New York.
Loading...
or
Not Currently Available for Direct Purchase