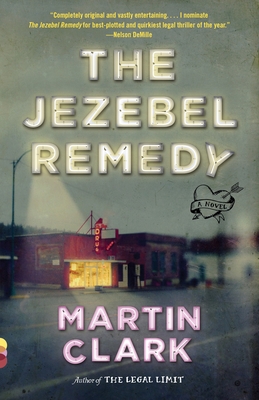 A BOSTON GLOBE BEST MYSTERY OF THE YEAR

Lisa and Joe Stone, married for twenty years and partners in their small Virginia law firm, handle routine, run-of-the-mill cases, including never-ending complaints from their cantankerous client Lettie VanSandt.  When Lettie dies in a suspicious accident and unexpectedly leaves her entire estate to Joe, the Stones find themselves entangled in a corporate conspiracy that will require all their legal skills—not to mention some difficult ethical choices—for them to survive. Complicating matters, Lisa is desperately trying to shield Joe from a dreadful secret, a mistake that she would give anything to erase.

With a cast of perfectly drawn imperfect characters, an intricate tour of the legal system, and a remarkably entertaining plot alongside a no-holds-barred portrait of a marriage, The Jezebel Remedy  is a legal drama in a class of its own.

“Completely original and vastly entertaining . . . I nominate The Jezebel Remedy for best-plotted and quirkiest legal thriller of the year.”—Nelson DeMille

“[A] real pleasure . . . blends legal thriller with the more whimsical elements of a freewheeling, picaresque novel.”
—The Boston Globe

“Clark is, hands down, our finest legal-thriller writer.”
—Entertainment Weekly

“A portrait of fine but flawed humans who find themselves unexpectedly thrust into the deep end of a system where the law can be either a life raft or a dead weight, depending on who gets to make the final judgment call. . . . Clark has a practiced ear for the subtlety and nuance of everyday existence.”
—BookPage

“The Jezebel Remedy is a cure for summer doldrums.”
—The Charlotte Observer

“Fast-paced and delightfully unpredictable. . . Not only do the frequent plot twists keep the reader glued to the page, but Clark’s depiction of life in rural Virginia and the depth and sensitivity of his character portrayals make the book memorable for much more than its clever legal machinations.”
—Library Journal (starred review)

“Its snappy repartee, shrewd regional observations, and quirky characterizations help one understand why Clark’s been compared to the likes of Elmore Leonard and, especially, Carl Hiaasen. Indeed, Clark seems to be doing for contemporary Virginia. . . what Hiaasen has done for South Florida.”
—Kirkus Reviews

“[Clark] has a diabolical imagination, which he employs brilliantly. To his unconventional thrillers, he brings a keen understanding of high principles as well as the realistic nuts and bolts of the legal profession. The Jezebel Remedy is an intelligent and surprising legal thriller with a rich and realistic setting, blended seamlessly with the insightful story of a marriage.”
—The News & Record (Greensboro, NC)

“A great David-and-Goliath story about a husband/wife law firm in rural Virginia. Legal thrills with all the quirks and comfort of small-town lawyering.”
—Jamie Kornegay, Garden & Gun

Martin Clark is a Virginia circuit court judge. His previous novels have been chosen as a New York Times Notable Book, a Washington Post Book World Best Book of the Year, a Bookmarks Magazine Best Book of the Year, a finalist for the Stephen Crane First Fiction Award, and a Book-of-the-Month Club selection. His novel The Legal Limit was the winner of the Library of Virginia’s People’s Choice Award and was called “a model of how to write a literary legal thriller” by The Oregonian. He lives in Patrick County, Virginia, with his wife, Deana.