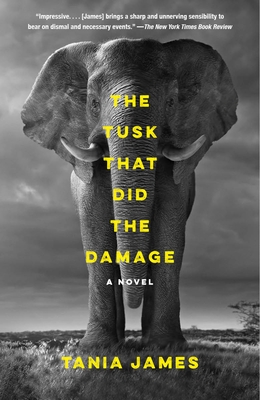 The Tusk That Did the Damage (Vintage Contemporaries)

The Tusk That Did the Damage is an utterly contemporary story about an ancient and majestic elephant, and his dangerous connection to the land and the people around him. Orphaned by poachers as a calf and sold into a life of labor, Gravedigger has broken free of his chains and is terrorizing the South Indian countryside. Caught up in the violence are the studious younger son of a rice farmer drawn into the sordid world of poaching; and a young American documentary filmmaker engaged in a risky affair with the veterinarian who is her subject. In three intertwined storylines—one of them narrated by the elephant himself—Tania James crafts a heartbreaking tale of the ivory trade, exploring the porous boundary between conservation and corruption. It is a wrenching exploration of love and betrayal, duty and loyalty, and the vexed relationship between man and nature.


Praise For The Tusk That Did the Damage (Vintage Contemporaries)…

“Impressive. . . . A captivating rendering of an animal’s point of view.” —The New York Times Book Review

“One of the most unusual and affecting books I’ve read in a long time. . . . A compulsively readable, devastating novel. —Jonathan Safran Foer, author of Extremely Loud and Incredibly Close

“Heart-racingly paced. . . . Moves between the humid intensity of southern India’s jungles . . . and the elephant’s primordial internal landscape with grace and humour, as light-footed as a poacher.” —National Geographic Traveller

“Inventive. . . . Remarkable . . . delves into India’s mythic, troubled history with elephants—a strange marriage of reverence and violence—and asks readers to imagine the incomprehensible, to experience the world, for a few moments, through the eyes of a killer elephant called the Gravedigger.” —Los Angeles Review of Books

“Brisk as a thriller. . . . Although the focus is primarily on poaching, the story’s true subject is larger and more profound: How do humans and animals—whose lives at times seem at cross purposes—co-exist? . . . [James’s] elephants loom larger than life.” —The Washington Post

“Gorgeously written . . . unlike anything you’ve ever read . . . . Thought-provoking.” —Glamour

“Spectacular, a pinwheeling multiperspectival novel with a cast that includes my favorite character of recent memory, the Gravedigger, an orphaned homicidal elephant. Tania James is one of our best writers, and here she is at the height of her powers.” —Karen Russell, author of Swamplandia

“[The Tusk that Did the Damage] will leave you breathless.” —Time Out NYC

“[James’s] prose is simple and beautiful, and her characters, both human and pachyderm, are lovingly rendered.” —Bustle Magazine

“Original and multi-layered. . . . James captures the majestic beauty of elephants, the despair of impoverished villagers, and their bloody attempts at self-reliance.” —Washington City Paper

“Impressive. . . . James is a lyrical writer.” —The Guardian

“A brutal look at an ugly industry, James deftly navigates the fuzzy line between right and wrong with compassion and honesty.” —BookRiot

“Imaginative and affecting. . . . You’ll come away feeling angry and helpless about why humans do the things we do, but strangely elevated by James’ tender, tactile prose.” —Elle India

“A novel of great moral intensity. . . . Tania James’s gift, her genius, is to turn this scenario into an occasion for grace.” —Julie Otsuka, author of The Buddha in the Attic

Tania James is the author of the novel Atlas of Unknowns and the short story collection Aerogrammes. Her fiction has appeared in Boston Review, Granta, Guernica, One Story, A Public Space, and The Kenyon Review. She lives in Washington, D.C.
Loading...
or
Not Currently Available for Direct Purchase