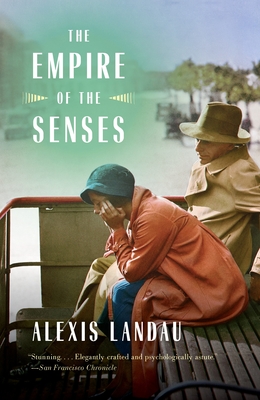 The Empire of the Senses (Paperback)

The Empire of the Senses is an enthralling tale of love and war, duty and self-discovery. It begins in 1914 when Lev Perlmutter, an assimilated German Jew fighting in World War I, finds unexpected companionship on the Eastern Front; back at home, his wife Josephine embarks on a clandestine affair of her own. A decade later, during the heady, politically charged interwar years in Berlin, their children—one, a nascent Fascist struggling with his sexuality, the other a young woman entranced by the glitz and glamour of the Jazz Age—experience their own romantic awakenings. With a painter’s sensibility for the layered images that comprise our lives, this exquisite novel by Alexis Landau marks the emergence of a writer uniquely talented in bringing the past to the present.

Alexis Landau is a graduate of Vassar College. She received her MFA from Emerson College and her PhD in English Literature and Creative Writing from the University of Southern California. This is her first novel. Alexis lives with her husband and her two children in Santa Monica, California.

Praise For The Empire of the Senses: A Novel…

“A gripping, beautifully written saga. . . . A fresh and moving perspective on a piece of history we thought we already knew.” —Christina Baker Kline, author of Orphan Train

“Poignant. . . . Richly appointed. . . . Life at any time and place, [Landau’s] title and her prose seem to say, is full of sensual beauty, if you choose to live it that way.” —Tablet

“Lush, smart, sexy, affecting, interesting, beautifully researched, and well made. Spending time in the world of this novel is an absolute pleasure.” —Aimee Bender, author of The Particular Sadness of Lemon Cake

“A top-notch literary saga with a gripping plotline. . . . Each perfectly crafted individual is fully involved in the surrounding world. In Landau’s hands, even a simple trip to the barber becomes meaningful and illustrative of the novel’s themes. The characters’ actions and thoughts are so three-dimensionally human that readers may forget they’re reading fiction.” —Booklist

“[Landau] follows one family through two wars, four romances and one death with . . . thought and craft. . . . Highly readable.” —Kirkus

“An impressive debut. . . . Where Landau truly excels is with her scope, her ability to guide [her characters] through the years, highlighting national tragedy while homing in on individual plights. The result is an expansive novel but also one skillfully in tune with the intricacies of the human spirit. . . . Gripping.” —The National (UAE)
or
Not Currently Available for Direct Purchase
Copyright © 2020 American Booksellers Association