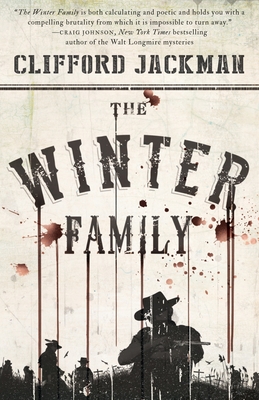 After being court-martialed for their actions during the Civil War, a band of hardened Union soldiers recast themselves as outlaws. Among these twisted men who’ve found brotherhood in battle are a psychopathic killer, a mean, moronic pair of brothers, an impassive ex-slave, a dangerous child prodigy and, at the malevolent center, their cold, stoic leader: Augustus Winter, a man with an almost pathological resistance to society's rules and a preternatural gift for butchery that is matched only by his eerie charisma.

From political thuggery during a Chicago election to work as bounty hunters in the deserts of Arizona, Winter and his crew follow a grim, borderland morality that plays out, time and again, in ruthless carnage.

Praise For The Winter Family…

Longlisted for the 2015 Giller Prize

“Calculating and poetic . . . holds you with a compelling brutality from which it is impossible to turn away.” --Craig Johnson, New York Times bestselling author of the Walt Longmire mysteries

“Capable of standing in [Cormac McCarthy’s] company, which is high praise indeed. The Winter Family is a philosophical spaghetti western that doesn’t stint on the tomato sauce, served up with flair.” —Quill & Quire (starred review)

“Sadistic but mesmerizing. . . . From the first rifle shot to the last burned body.” —The New York Times Book Review

“Stink and filth, corruption and depravity, lawlessness and unruliness. . . . [Augustus Winter is] as fascinating as any other complicatedly deadly thing.” —The Globe and Mail

“The adventures of a gleefully nihilistic group of outlaws. . . . Brutal, at times darkly funny, and utterly gripping from the first page to the last.” —Scott Smith, New York Times bestselling author of A Simple Plan and The Ruins

“A blood-soaked historical western covering over three decades of mayhem. . . . [A] vivid portrayal of men who choose violence and lawlessness as their way of life, and the justifications they create to rationalize their immoral behavior. This is a chilling tale.” —Publishers Weekly

“A wild ride into the conflict between freedom and civilization written in brains and blood. . . . This book is a round house punch of awesome. It came out of nowhere and tackled me into the dirt.” —Michael D. Griffiths, SFReader.com

“Bloodletting as philosophical exercise, and not for the faint of heart.” —Kirkus Reviews

“Brutal. Nihilistic. Extreme. Clifford Jackman's debut, The Winter Family, lit my synapses up like a pinball machine. I joined golden-eyed Augustus Winter and his band of merry sociopaths on their journey through the dying West, civilization squeezing in from every angle—this is a raw, blood-splattered picaresque that I enjoyed immensely. Jackman throws nine kinds of hell at you in this book, unloading with both barrels, and never lets up the intensity.” —Craig Davidson, author of Cataract City

Clifford Jackman was born in Deep River, Ontario, and grew up in Ottawa. He studied English literature at York University and Queen’s University before attending Osgoode Hall Law School and being called to the bar in 2008. He lives in Guelph, Ontario, with his wife, Cathy, and his son, Anthony.
or
Not Currently Available for Direct Purchase