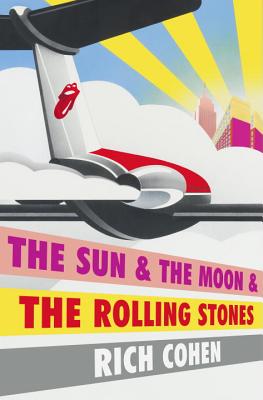 The Sun & the Moon & the Rolling Stones

A panoramic narrative history that will give readers a new understanding of the Rolling Stones, viewed through the impassioned and opinionated lens of the Vanity Fair contributor--and co-creator of HBO's Vinyl--who was along for the ride as a young reporter on the road with the band in the 1990s Rich Cohen enters the Stones epic as a young journalist on the road with the band and quickly falls under their sway--privy to the jokes, the camaraderie, the bitchiness, the hard living. Inspired by a lifelong appreciation of the music that borders on obsession, Cohen's chronicle of the band is informed by the rigorous views of a kid who grew up on the music and for whom the Stones will always be the greatest rock 'n' roll band of all time. The story begins at the beginning: the fateful meeting of Mick Jagger and Keith Richards on a train platform in 1961--and goes on to span decades, with a focus on the golden run--from the albums Beggars Banquet (1968) to Exile on Main Street (1972)--when the Stones were prolific and innovative and at the height of their powers. Cohen is equally as good on the low points as the highs, and he puts his finger on the moments that not only defined the Stones as gifted musicians schooled in the blues and arguably the most innovative songwriters of their generation, but as the avatars of so much in our modern culture. In the end, though, after the drugs and the girlfriends and the rows, there is the music. The Sun & The Moon & The Rolling Stones makes you want to listen to every song in your library anew and search out the obscure gems that you've yet to hear. The music, together with Cohen's fresh and galvanizing consideration of the band, will define, once and forever, why the Stones will always matter. Praise for The Sun & The Moon & The Rolling Stones "Fabulous . . . The research is meticulous. . . . Cohen's own interviews even yield some new Stones lore."--The Wall Street Journal " Cohen] can catch the way a record can seem to remake the world and] how songs make a world you can't escape."--Pitchfork "No one can tell this story, wringing new life even from the leathery faces of mummies like the Rolling Stones, like Rich Cohen. . . . The book beautifully details the very meaning of rock 'n' roll."--New York Observer "Masterful . . . Hundreds of books have been written about this particular band and Cohen's] will rank among the very best of the bunch."--Chicago Tribune "Cohen, who has shown time and time again he can take any history lesson and make it personal and interesting . . . somehow tells the Stones'] story in a whole different way. This might be the best music book of 2016."--Men's Journal " Cohen's] account of the band's rise from 'footloose' kids to 'old, clean, prosperous' stars is, like the Stones, irresistible."--People "You will, as with the best music bios, want to follow along on vinyl."--The Washington Post "A fresh take on dusty topics like Altamont and the Stones' relationship with the Beatles . . . Cohen takes pilgrimages to places like Nellcote, the French mansion where the Stones made Exile on Main Street, and recounts fascinating moments from his time on tour."--Rolling Stone "On the short list of worthwhile books about the Stones . . . The book is stuffed with insights."--San Francisco Chronicle

Rich Cohen is the author of the New York Times bestsellers Tough Jews, The Avengers, Monsters, and (with Jerry Weintraub) When I Stop Talking, You'll Know I'm Dead. He is a co-creator of the HBO series Vinyl and a contributing editor at Vanity Fair and Rolling Stone and has written for The New Yorker, The Atlantic, and Harper's Magazine, among others. Cohen has won the Great Lakes Book Award, the Chicago Public Library's 21st Century Award, and the ASCAP Deems Taylor Award for outstanding coverage of music. His stories have been included in The Best American Essays and The Best American Travel Writing. He lives in Connecticut.
Loading...
or
Not Currently Available for Direct Purchase