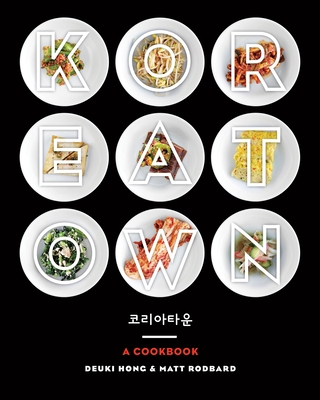 A New York Times bestseller and one of the most praised Korean cookbooks of all time, you'll explore the foods and flavors of Koreatowns across America through this collection of 100 recipes.

This is not your average "journey to Asia" cookbook. Koreatown is a spicy, funky, flavor-packed love affair with the grit and charm of Korean cooking in America. Koreatowns around the country are synonymous with mealtime feasts and late-night chef hangouts, and Deuki Hong and Matt Rodbard show us why through stories, interviews, and over 100 delicious, super-approachable recipes.

It's spicy, it's fermented, it's sweet and savory and loaded with umami: Korean cuisine is poised to break out in the U.S., but until now, the cookbooks have been focused on taking readers on an idealized Korean journey. Koreatown, though, is all about what's real and happening right here: the foods of Korean American communities all over our country, from L.A. to New York City, from Atlanta to Chicago. We follow Rodbard and Hong through those communities with stories and recipes for everything from beloved Korean barbecue favorites like bulgogi and kalbi to the lesser-known but deeply satisfying stews, soups, noodles, salads, drinks, and the many kimchis of the Korean American table.

Praise For Koreatown: A Cookbook…

"Deuki Hong and Matt Rodbard have given us a deep and important look at the people, places and cuisine that are reshaping what we want for dinner. Koreatown thrills with flavors that will change your life." --Anthony Bourdain

"Koreatown is not a place. It’s an energy, an attitude, a painstaking stew of spice and frugality and brutally honest flavors. For the first time, here’s a book that captures all of its electricity and mystery in a voice that is both vibrant and respectful." --Edward Lee, chef and author of Smoke and Pickles

"Eating Korean food is the best legal high in the world and Koreatown is the gateway drug you need!" --Gary Shteyngart, author of The Russian Debutante's Handbook and Little Failure: A Memoir

"The food of Korea is complex, and becomes fully realized in this amazing new book by Deuki Hong and Matt Rodbard. With a thrilling new voice and original ideas, this is not the same boring "ethnic eats explainer" that is often used as an excuse to profile a country's cuisine. I couldn’t put it down, and can't wait to start cooking from these pages. Bibimbap for the win!" --Andrew Zimmern, author and television host

“Thanks to this cookbook, I can finally make all the dishes at home that I obsess over when I visit Koreatown. It’s amazing to have all these mysteriously delicious recipes in one place.” --Sean Brock, chef and author of Heritage

"Unwrap the world of Korean-American food through a guide demystifying the cuisine of fire and fermentation."  --The New York Times

"A great book whether you're new to Korean food or looking for recipes for old favorites, Koreatown will have you running to your local Asian grocery to stock up on rice cakes, gochujang, and kimchi. Or, better yet, making your own kimchi from scratch." —Epicurious

"The evangelists Korean food needs to become the next big cuisine." —Tasting Table

"The last Korean cookbook that you will ever need."  —Vice

"In the burgeoning genre of cookbooks written as much to be read as to be cooked from, Koreatown paints a portrait of America's vibrant Korean-American communities and invites a broad audience to experiment with this style of cooking." —Eater

"Korean food is built on bold flavors: spicy pickled vegetables, sweet, smoky meats and pungent, salty stews. That can be a little intimidating for some American diners. But the authors of Koreatown have changed that." — NPR "Morning Edition"

"A detailed and sharply written collection that includes nearly 100 recipes, as well as photos, short essays, and interviews that explore various K-towns across the U.S." --Publishers Weekly(starred review)

Deuki Hong is chef of the smash-hit Korean barbecue restaurant Kang Ho Dong Baekjeong in Manhattan’s Koreatown. He began his cooking career at 15 as a line cook under Aarón Sanchez at Centrico before heading to the Culinary Institute Of America. After graduating near the top of his class, he cooked under David Chang at Momofuku Noodle Bar before spending two years on the line at Jean-Georges. He's recently been recognized as an Eater Young Gun and named to the Zagat 30 Under 30 list.