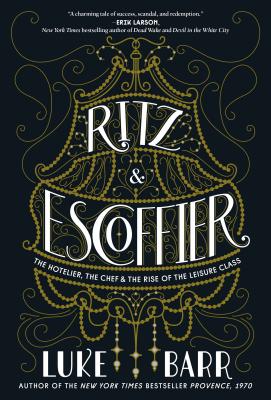 In a tale replete with scandal and opulence, Luke Barr, author of the New York Times bestselling Provence, 1970, transports readers to turn-of-the-century London and Paris to discover how celebrated hotelier César Ritz and famed chef Auguste Escoffier joined forces at the Savoy Hotel to spawn the modern luxury hotel and restaurant, where women and American Jews mingled with British high society, signaling a new social order and the rise of the middle class.

In early August 1889, César Ritz, a Swiss hotelier highly regarded for his exquisite taste, found himself at the Savoy Hotel in London. He had come at the request of Richard D'Oyly Carte, the financier of Gilbert & Sullivan's comic operas, who had modernized theater and was now looking to create the world's best hotel. D'Oyly Carte soon seduced Ritz to move to London with his team, which included Auguste Escoffier, the chef de cuisine known for his elevated, original dishes. The result was a hotel and restaurant like no one had ever experienced, run in often mysterious and always extravagant ways--which created quite a scandal once exposed.
Barr deftly re-creates the thrilling Belle Epoque era just before World War I, when British aristocracy was at its peak, women began dining out unaccompanied by men, and American nouveaux riches and gauche industrialists convened in London to show off their wealth. In their collaboration at the still celebrated Savoy Hotel, where they welcomed loyal and sometimes salacious clients, such as Oscar Wilde and Sarah Bernhardt, Escoffier created the modern kitchen brigade and codified French cuisine for the ages in his seminal Le Guide culinaire, which remains in print today, and Ritz, whose name continues to grace the finest hotels across the world, created the world's first luxury hotel. The pair also ruffled more than a few feathers in the process. Fine dining would never be the same--or more intriguing.

Praise For Ritz and Escoffier: The Hotelier, The Chef, and the Rise of the Leisure Class…

"Ritz and Escoffier, Luke Barr’s entertaining narrative history, reads like a novel…Mr. Barr has done a fine job evoking fin-de-siecle London and the characters of the two odd men who played such a pivotal role in that exhilarating time.” -Wall Street Journal

“In this winningly-told story, Luke Barr explores the advent of the luxe life through the saga of hotelier Cesar Ritz and chef Auguste Escoffier, whose partnership brought us not only the adjective ‘ritzy,’ itself no small testament, but also such once-novel phenomena as hotel rooms with their own bathrooms, and innovative dishes like peach Melba. It’s a charming tale of success, scandal, and redemption—complete with an unexpected villain. Warning: It will make you hungry, and a little nostalgic for bygone times.”—Erik Larson, #1 New York Times bestselling author of Dead Wake and Devil in the White City

"When you eat a Peach Melba, or drink a Grand Marnier, you have these men to thank; they coined the names, then popularised the concoctions. Ritz himself became not merely a byword for luxury but the actual word for it." -The Economist

“Barr’s prose is lively and his sourcing impeccable...a thoroughly enjoyable look into a defining moment of culinary history.” —Publishers Weekly

“Bar...vividly captures the moment when Ritz and Escoffier conceptualized and created a new type of luxury establishment in which the aristocracy, the nouveau riche, and the beau monde mingled freely and easily. Barr’s highly enjoyable and well-researched book carries the reader into the intimate heart of Ritz and Escoffier’s philosophy.” -Library Journal

“The book is as much a celebration of luxury as it is the tale of two scrappy, high-achieving men, and Barr intertwines their biographies with the lush social environs they created […] It’s difficult not to drool on the pages at the thought of foie gras, truffles, Escoffier’s legendary Pêches Melba (named for the famed Australian soprano Nellie Melba), or timbales of crayfish mousse. The book goes down light as an aperitif, and lays down the work of crafting luxurious dreams in spare, workmanlike prose.” -The Village Voice

“[A] lively, gossipy account . . . not just a fluidly structured dual biography, but a provocative history of a turning point in the evolving hotel and restaurant industry.”  —Booklist

“Was César Ritz the first ‘influencer,’ as goes the sobriquet these days? A merchant of dreams during the final gasp of the Victorian age, he was not only the sirer of a new cosmopolitanism, as depicted in a saucy just-out double-biography Ritz & Escoffier: The Hotelier, The Chef, and the Rise of the Leisure Class, but also the harbinger of something we almost take for granted now: hotels as ‘lifestyle’ and food as pop culture.” -Toronto Star

“If ever a book should be picked up and produced for ‘Masterpiece Theatre,’ this is it. In the meantime, readers can feast on this delightfully written, entertaining book.” -The Florida Times-Union

“Luke Barr’s delightful and engrossing book is a gripping story of rags to riches to scandal and back, and also a trenchant study of how our materialistic society formulated the idea of luxury. It’s written with wit and charm, seducing the reader just as deftly as its subjects once seduced international society.”
—Andrew Solomon, National Book Award winning author of Far and Away and Far from the Tree


“So very much of what is exciting in food and hospitality today, started with Ritz and Escoffier.  They were modern for their time; they are modern for ours.  Barr’s book is fascinating from beginning to end.”—Dorie Greenspan, James Beard Award-winning author of Dorie’s Cookies and Baking Chez Moi

"Luke Barr tells the remarkable story of how César Ritz built a world-class hospitality empire, and his esteemed chef Escoffier, took fine dining to new heights. Ritz & Escoffier is an entertaining account of how they adapted to–and even changed–social customs, helping the world modernize, and leaving behind an impressive legacy.”—David Lebovitz, New York Times bestselling author of L'appart and My Paris Kitchen

“Such a fabulous couple of characters and such glamorous, dicey cosmopolitan milieux that Luke Barr depicts with such verve and lucidity. Ritz & Escoffier is a case study of the birth of branded luxury that reads like a dark, delicious urban spinoff prequel to Downton Abbey.”—Kurt Andersen, New York Times bestselling author of You Can’t Spell America Without Me and Fantasyland

“A thrilling story of how an outsider—a Swiss peasant—instructed 19th century aristocrats, celebrities, politicians, and plutocrats how to live and, in doing so, single-handedly defined modern luxury. Luke Barr’s incandescent narrative is as smooth and seductive as the service at the Ritz."
—Kate Betts, author of My Paris Dream

“Ritz & Escoffier is a vividly engaging piece of social history about two humbly-born visionaries: one a great hotelier, and one a great chef, and the temples of luxury they fashioned first at the Savoy Hotel in Belle Epoque London and then at the Paris Ritz. Filled with intriguing details and fascinating (and sometimes unsavory) characters, Luke Barr has re-created a certain time and place with the deftest of touches.” —Daphne Merkin, author of This Close to Happy and The Fame Lunches

LUKE BARR is the author of the New York Times bestselling Provence, 1970. Raised in the San Francisco Bay Area and Switzerland, Barr attended Harvard College and was formerly the features editor at Travel + Leisure magazine. He lives in Brooklyn with his wife and their two daughters.
Loading...
or
Not Currently Available for Direct Purchase