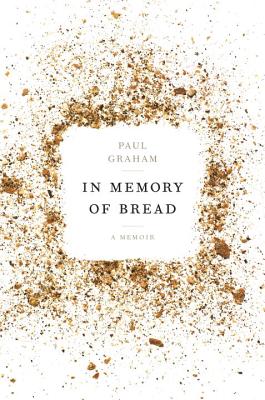 In Memory of Bread (Hardcover)

The funny, poignant memoir of one man’s struggle to come to terms with his celiac diagnosis, forcing him to reexamine his relationship with food.

When Paul Graham was suddenly diagnosed with celiac disease at the age of thirty-six, he was forced to say goodbye to traditional pasta, pizza, sandwiches, and more. Gone, too, were some of his favorite hobbies, including brewing beer with a buddy and gorging on his wife’s homemade breads. Struggling to understand why he and so many others had become allergic to wheat, barley, rye, oats, and other dietary staples, Graham researched the production of modern wheat and learned that not only has the grain been altered from ancestral varieties but it’s also commonly added to thousands of processed foods.

In writing that is effortless and engaging, Paul explores why incidence of the disease is on the rise while also grappling with an identity crisis—given that all his favorite pastimes involved wheat in some form. His honest, unflinching, and at times humorous journey towards health and acceptance makes an inspiring read.

PAUL GRAHAM is an associate professor of English at St. Lawrence University in upstate New York and his essays have appeared twice in the Best Food Writing anthology (2012 and 2013). Graham lives with his wife and their German shepherd in rural New York on the Canadian border.

Praise For In Memory of Bread: A Memoir…

“The basic structure of Graham’s new memoir, In Memory of Bread, is the sometimes funny, sometimes poignant chronology of how he cured himself… His story is broadened and made far more interesting with a wide-ranging, well-researched dissertation on wheat, involving history, culture, chemistry and agriculture.”
—The Washington Post

“Paul Graham has written an account of saying farewell to a familiar pleasure that manages to combine an intelligent survey of modern agriculture with a touching story of a small but all-too-real grief. His book is an essay that does what essays should: combine a useful idea with a poignant moral.”
—Adam Gopnik

“A medical-culinary adventure story, by turns harrowing, enlightening, and thrillingly honest, In Memory of Bread is an elegy for the most elemental, essential food there is. Diagnosed with celiac disease and forced to rethink everything he's ever known about cooking and eating, Paul Graham has written a brilliant examination of the very meaning of food, memory, and desire.”
—Luke Barr, author of Provence, 1970

“Paul Graham's adventures into the world of gluten-free eating are every bit as fascinating as those of A.J. Liebling and Julia Child into the gastronomy of Paris.”
—Melissa Coleman, author of This Life Is in Your Hands

“Paul Graham's ability to transform his relationship with food and eating and the acceptance he's had to cultivate along the way are truly inspiring. I love how open and honest he is about his journey and know others will, too.”
—Andie Mitchell, author of It Was Me All Along

“This book is a must read! This moving and beautifully written account of giving up the foods you love in order to heal and flourish is one of the best I have ever read.”
—Anna Sobaski, founder and president of Breads from Anna

“In detailed and thoughtful prose, balancing the lyrical with the scientific, Graham illustrates how his deep connection to bread was challenged, and how his body was gravely poisoned by his glutinous true love.”
—Publishers Weekly
or
Not Currently Available for Direct Purchase
Copyright © 2020 American Booksellers Association