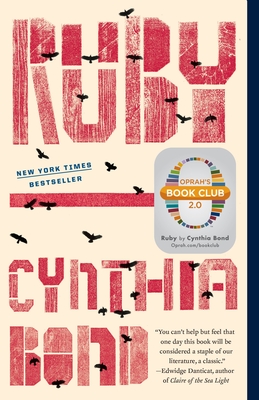 “Channeling the lyrical phantasmagoria of early Toni Morrison and the sexual and racial brutality of the 20th century east Texas, Cynthia Bond has created a moving and indelible portrait of a fallen woman... Bond traffics in extremely difficult subjects with a grace and bigheartedness that makes for an accomplished, enthralling read.” —Thomas Chatterton Williams, San Francisco Chronicle

“Hauntingly beautiful… Bond wrote Ruby to bear witness for the girls who can't escape the torture. And to encourage the girls who do to believe that even after such dark experiences, there can be light”—NPR

“Reading Cynthia Bond’s Ruby, you can’t help but feel that one day this book will be considered a staple of our literature, a classic. Lush, deep, momentous, much like the people and landscape it describes, Ruby enchants not just with its powerful tale of lifelong quests and unrelenting love, but also with its exquisite language. It is a treasure of a book, one you won’t soon forget.”—Edwidge Danticat, author of Claire of the Sea Light

“Pure magic. Every line gleams with vigor and sound and beauty. Ruby somehow manages to contain the darkness of racial conflict and cruelty, the persistence of memory, the physical darkness of the piney woods and strange elemental forces, and weld it together with bright seams of love, loyalty, friendship, laced with the petty comedies of small-town lives. Slow tragedies, sudden light. This stunning debut delivers and delivers and delivers.”—Janet Fitch, author of White Oleander

“Ruby is a harrowing, hallucinatory novel, a love story and a ghost story about one woman’s attempt to escape the legacy of violence in a small southern town. Cynthia Bond writes with a dazzling poetry that’s part William Faulkner, part Toni Morrison, yet entirely her own. Ruby is encircled by shadows, but incandescent with light.”—Anthony Marra, author of A Constellation of Vital Phenomena

“From the first sentence, Cynthia Bond’s unforgettable debut novel, Ruby, took hold of me and it hasn’t let go. Cynthia Bond has written a book everyone should read, about the power of love to overcome even the darkest of histories.”—Amy Greene, author of Bloodroot

“Bond proves to be a powerful literary force, a writer whose unflinching yet lyrical prose is reminiscent of Toni Morrison’s.” —O, The Oprah Magazine

“In Ruby, Bond has created a heroine worthy of the great female protagonists of Toni Morrison…and Zora Neale Hurston… Bond’s style of writing is as magical as an East Texas sunrise.” —Dallas Morning News

“Evocative, affective and accomplished… Bond tells the story of Ruby and Ephram’s lives and their relationship with unflinching honesty and a surreal, haunting quality.” —Texas Observer

“Gorgeous… Bond is a gifted writer, powerful and nimble… [I]t’s tempting to call up Toni Morrison or Alice Walker or Ntozake Shange. It should be done more as compliment than comparison, though…Bond’s is a robustly original voice.”
—Barnes and Noble Review

“If you love well-written historical fiction and multifaceted grown-up characters, put Ruby at the top of your beach bag... Bond delivers multiple goods with this one.” —Essence

“Cynthia Bond creates a vibrant chorus of voices united by a common struggle… [T]he prose’s lyricism and Ruby’s interaction with the dead call to mind Beloved… While Bond’s characters may sense the inevitability of loss and loneliness, they are also driven by something else, a timid hopefulness that they may find serenity and compassion amid the ghosts who haunt them.” —The Rumpus

“A testament to the power of the human spirit.” —Bustle

“Ruby explores the redeeming power of love in the face of horrific trauma… If the truth shall set us free, Ms. Bond shows us, in her story of grace, that love is truth.” —Pittsburgh Post-Gazette

“An unusual, rare and beautiful novel that is meant to be experienced as much as read.” —Shelf Awareness (starred)

“A stunning debut. Ruby is unforgettable.” —John Rechy, author of City of Night

“Cloaked in authenticity, Ruby is unlike anything else out there right now.”
—Windy City Times

“Many will compare Ruby to the work of Toni Morrison or Zora Neale Hurston…It may be most apt to compare Bond to Gabriel García Márquez. Ruby is woven with magical realism…Luminous.”—The Guardian (UK)

“Impeccably crafted… Ruby is undoubtedly the early work of a master storyteller whose literary lyricism is nothing short of pitch perfect.” —BookPage

“[A] daring, lushly written debut…Bond rightly insists that these stories must be heard. .. Readers can take heart as they see Ruby and Ephram stand up to brutality and small-mindedness, finding courage and thus a freedom that can never be taken from them. In their actions, they capture Bond’s own heartfelt hope: ‘If there is a message in my book, it’s that we will always rise.’”—Library Journal

CYNTHIA BOND has taught writing to homeless and at-risk youth throughout Los Angeles for more than fifteen years. She attended Northwestern University’s Medill School of Journalism, then moved to New York and attended the American Academy of Dramatic Arts. A PEN/Rosenthal Fellow, Bond founded the Blackbird Writing Collective in 2011. At present, Bond teaches therapeutic writing at Paradigm Malibu Adolescent Treatment Center. A native of East Texas, she lives in Los Angeles with her daughter.

How did Ruby’s story change the way you view the world? What does the novel show us about the nature of trauma and the power of compassion?

Celia copes with tragedy by putting her world in strict order, from her family life to her church life. But Ruby becomes lost to disorder. What accounts for their different approaches to emotional pain?

At the heart of the novel is Ruby’s vision of her children, and her vision of herself as a mother. How is she able to respond with a nurturing urge although no one nurtured her? Discuss the roles of mothers and fathers in Liberty.

How did your understanding of the Dyboù shift throughout the novel? Do you believe that evil comes from the supernatural or spiritual, or that it is simply part of human nature?

What protection do you think Ma Tante gives to young Maggie, Ruby, and Ephram? Are they comforted by her powers, or does she only stoke their fears?

What fuels the racism depicted in the novel? Do some of these factors persist today? Discuss Ruby’s different experiences with racism in East Texas, New York City, and on her trip back to Liberty.

As you read the story of Ruby’s mother, how did you react to the notion that the past is still present? What does it take to overcome the Bell family’s legacy?

What role does Christianity play in Liberty? Does faith enhance or hinder Celia and her congregation in their attempts to heal Ruby? What does Ephram’s baptism mean to him?

Discuss the irony of the township’s name. Is there any liberty for the novel’s African-American characters there? How do their experiences compare to the freedoms and shackles Ruby encounters in New York?

Otha Jennings and Ruby both lose their sanity as a result of Reverend Jennings’s actions, while chapter twenty reveals the Reverend’s own tormented past. In the novel, how do women and men react differently to trauma? How are the expectations for Liberty’s girls different from those for the boys?

The author gives us vivid scenes of the night on which Ruby’s fate was hinged. What were the Reverend’s motivations that night? As you read the scene from the perspective of different characters, how did your perceptions change?

Evoking the image of a precious gem, why is Ruby’s name appropriate? Throughout her life, what is she taught about her beauty and her value?

What common losses do Ruby and Ephram share, from childhood to adulthood? What opens their eyes to the possibility of peace? What do you predict for their future?

Although Ruby is a work of fiction, the situations it describes are very much a reality. How can you and your community help protect the most vulnerable?