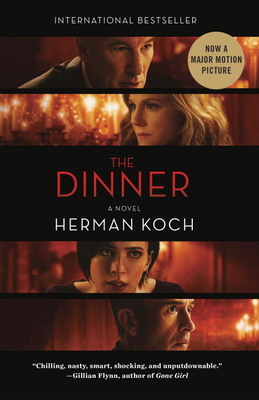 NEW YORK TIMES BESTSELLER • The darkly suspenseful tale of two families struggling to make the hardest decision of their lives—all over the course of one meal. Now a major motion picture.

It’s a summer’s evening in Amsterdam, and two couples meet at a fashionable restaurant for dinner. Between mouthfuls of food and over the scrapings of cutlery, the conversation remains a gentle hum of polite discourse. But behind the empty words, terrible things need to be said, and with every forced smile and every new course, the knives are being sharpened.

Each couple has a fifteen-year-old son. The two boys are united by their accountability for a single horrific act—an act that has triggered a police investigation and shattered the comfortable, insulated worlds of their families. As the dinner reaches its culinary climax, the conversation finally touches on their children, and as civility and friendship disintegrate, each couple shows just how far they are prepared to go to protect those they love.

“Brilliantly engineered . . . The novel is designed to make you think twice, then thrice, not only about what goes on within its pages, but also the next time indignation rises up, pure and fiery, in your own heart.”—Salon

“You’ll eat it up, with some fava beans and a nice Chianti.”—Entertainment Weekly

Praise For The Dinner (Movie Tie-In Edition): A Novel…

“Poised to shake up American publishing. . . . Koch tells a story that could very well take away your appetite.”—USA Today

“Koch’s ability to toy with the reader’s alliances while using one family’s distress to consider greater societal ills gives the novel a vital punch.”—Daily Beast

“A tart main course that explores how quickly the facade of civility can crumble. It's hard to digest at times, but with a thought-provoking taste that lingers.”—Cleveland Plain Dealer

“Briskly paced and full of ingenious twists—a compulsive read…for those who can tolerate the unsavory company, The Dinner is a treat they’ll gulp down in one sitting.”—Dallas Morning News

“The Dinner begins with drinks and dark satire, and goes stealthily and hauntingly from there. It's chilling, nasty, smart, shocking and unputdownable. Read the novel in one big gulp, and then make plans with friends—you’ll be desperate to debate this book over cocktails, appetizers, entrees, dessert . . . and then you still won't be done talking about it.”—Gillian Flynn, author of Gone Girl

“Funny, provocative and exceedingly dark, this is a brilliantly addictive novel that wraps its hands around your throat on page one and doesn’t let go.”—SJ Watson, author of Before I Go to Sleep

“Herman Koch has written a sneakily disturbing novel.  He lures us into his story with his unfailingly reasonable tone (just acidic enough to be entertaining), and before we know it we've found ourselves in places we never would've consented to go.  The Dinner is a smart, amiably misanthropic book, and it's tremendous fun to read.”— Scott Smith, author of The Ruins

“The Dinner is a riveting, compelling and a deliciously uncomfortable read. Like all great satire it is both lacerating and so very funny. . . . Intelligent and complex, this novel is both a punch to the guts and also a tonic. It clears the air. A wonderful book.”—Christos Tsiolkas, author of The Slap

“What a tremendous book. I loved every single gripping and strange thing about it.”—MJ Hyland, author of Carry Me Down

“By the end of The Dinner you'll have to rethink everything, including who you are and what you believe. This is a book you won't forget.”—David Vann, author of Dirt

“This chilling novel starts out as a witty look at contemporary manners . . . before turning into a take-no-prisoners psychological thriller. . . .With dark humor, Koch dramatizes the lengths to which people will go to preserve a comfortable way of life . . . this is a cunningly crafted thriller that will never allow you to look at a serviette in the same way again.”—Publishers Weekly (starred review)

HERMAN KOCH is the author of seven novels and three collections of short stories. The Dinner, his sixth novel, has been published in 25 countries, and was the winner of the Publieksprijs Prize in 2009. He currently lives in Amsterdam.