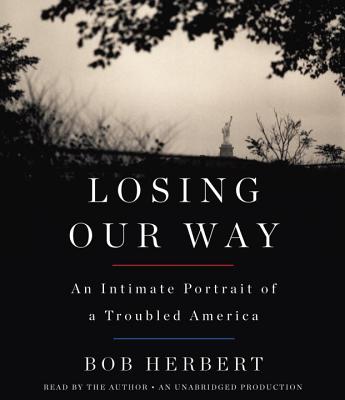 An Intimate Portrait of a Troubled America

From longtime "New York Times" columnist Bob Herbert comes a wrenching portrayal of ordinary Americans struggling for survival in a nation that has lost its way
Inhis eighteen years as an opinion columnist for "The New York Times," Herbert championed the working poor and the middle class. After filing his last column in 2011, he set off on a journey across the country to report on Americans who were being left behind in an economy that has never fully recovered from the Great Recession. The portraits of those he encountered fuel his new book, "Losing Our Way." Herbert's combination of heartrending reporting and keen political analysis is the purest expression since the Occupy movement of the plight of the 99 percent.
The individuals and families who are paying the price of America's bad choices in recent decades form the book's emotional center: an exhausted high school student in Brooklyn who works the overnight shift in a factory at minimum wage to help pay her family's rent; a twenty-four-year-old soldier from Peachtree City, Georgia, who loses both legs in a misguided, mismanaged, seemingly endless war; a young woman, only recently engaged, who suffers devastating injuries in a tragic bridge collapse in Minneapolis; and a group of parents in Pittsburgh who courageously fight back against the politicians who decimated funding for their children's schools.
Herbert reminds us of a time in America when unemployment was low, wages and profits were high, and the nation's wealth, by current standards, was distributed much more equitably. Today, the gap between the wealthy and everyone else has widened dramatically, the nation's physical plant is crumbling, and the inability to find decent work is a plague on a generation. Herbert traces where we went wrong and spotlights the drastic and dangerous shift of political power from ordinary Americans to the corporate and financial elite. Hope for America, he argues, lies in a concerted push to redress that political imbalance. Searing and unforgettable, "Losing Our Way" ultimately inspires with its faith in ordinary citizens to take back their true political power and reclaim the American dream.

BOB HERBERT, an opinion columnist for"The""New York Times"from 1993 to 2011, is a Distinguished Senior Fellow at Demos, a publicpolicy think tank in New York City."
Loading...
or
Not Currently Available for Direct Purchase