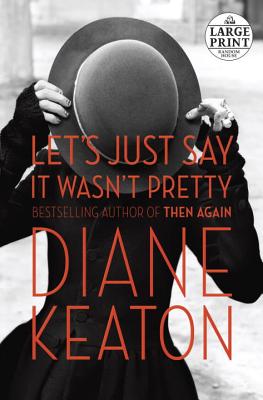 NEW YORK TIMES BESTSELLER
From Academy Award winner and bestselling author Diane Keaton comes a candid, hilarious, and deeply affecting look at beauty, aging, and the importance of staying true to yourself no matter what anyone else thinks.


Diane Keaton has spent a lifetime coloring outside the lines of the conventional notion of beauty. In Let's Just Say It Wasn t Pretty, she shares the wisdom she's accumulated through the years as a mother, daughter, actress, artist, and international style icon. This is a book only Diane Keaton could write a smart and funny chronicle of the ups and downs of living and working in a world obsessed with beauty.
In her one-of-a-kind voice, Keaton offers up a message of empowerment for anyone who's ever dreamed of kicking back against the should's and supposed to's that undermine our pursuit of beauty in all its forms. From a mortifying encounter with a makeup artist who tells her she needs to get her eyes fixed to an awkward excursion to Victoria's Secret with her teenage daughter, Keaton shares funny and not-so-funny moments from her life in and out of the public eye.
For Diane Keaton, being beautiful starts with being true to who you are, and in this book she also offers self-knowing commentary on the bold personal choices she's made through the years: the wide-brimmed hats, outrageous shoes, and all-weather turtlenecks that have made her an inspiration to anyone who cherishes truly individual style and catnip to paparazzi worldwide. She recounts her experiences with the many men in her life including Warren Beatty, Jack Nicholson, Al Pacino, and Sam Shepard shows how our ideals of beauty change as we age, and explains why a life well lived may be the most beautiful thing of all.
Wryly observant and as fiercely original as Diane Keaton herself, Let's Just Say It Wasn t Pretty is a head-turner of a book that holds up a mirror to our beauty obsessions and encourages us to like what we see.
Praise for Let's Just Say It Wasn't Pretty

Behind the sterling movie credits and tomboyish wardrobe, we see a soulful and deep woman contemplating the narrative arc of her own life. Newsweek
Delicious writing . . . This book is like a dishy lunch with the movie star you thought you d never be lucky enough to meet. . . . Diane Keaton is in a class by herself and this book is good for the soul. Liz Smith, Chicago Tribune
She's talented, iconic, quirky . . . and wonderfully blunt. This is just a small sampling of the reasons we love Diane Keaton, and they all permeate the pages of her new memoir. Elle
As disarming and personable as the actress herself. The Huffington Post

Praise for Diane Keaton’s Then Again

“A poem about women living in one another’s not uncomplicated memories . . . Part of what makes Diane Keaton’s memoir, Then Again, truly amazing is that she does away with the star’s ‘me’ and replaces it with a daughter’s ‘I.’ ”—Hilton Als, The New Yorker

Diane Keaton is the New York Times bestselling author of Then Again, which was named one of the ten best books of the year by Janet Maslin ofThe New York Times, People, and Vogue. She has starred in some of the most memorable movies of the past forty years, including the Godfather trilogy, Annie Hall, Manhattan, Reds, Baby Boom, The First Wives Club, and Something s Gotta Give. Her many awards include the Golden Globe and the Academy Award. Keaton lives with her daughter and son in Los Angeles. From the Audiobook Download edition."
Loading...
or
Not Currently Available for Direct Purchase