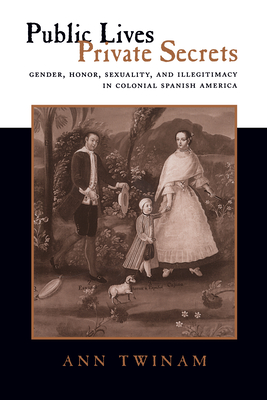 Throughout the eighteenth and early nineteenth centuries, illegitimate offspring of elite families in colonial Spanish America appealed to the Council and C mara of the Indies in Spain to purchase gracias al sacar legitimations. Their applications provided intimate testimony concerning their own lives, accounts of their parents' sexual relationships, and details regarding the impact of illegitimacy within their families and communities. Bourbon officials in Spain debated which petitions merited approval, and in the process forged policies concerning gender, sexuality, illegitimacy, and the family.

Scattered throughout the Archive of the Indies, the petitions were difficult to locate until the author determined the pattern of how they were archived and was able to access this extraordinarily rich new source for Spanish American social history. For this book, she has not only analyzed the gracias al sacar documents of some 240 illegitimates, but also traced the histories of those involved in eighteen major archives in Spain, the Caribbean, Mexico, and South America.

The collective biographies of the gracias al sacar parents, and of their illegitimate offspring--as infants, children, and adults--reveal a Hispanic mentality that consciously differentiated between the public and private spheres. Colonial elites distinguished between a private circle of family, kin, and intimate friends and a public world where status (honor) was negotiated with outside peers. This bifurcation was distinct yet permeable; an individual might pass to negotiate a public status different from a private reality. Thus, an unwed mother might enjoy the public reputation that she was a virgin, the bastard son of a priest might be treated as legitimate, and a mulatto could be transformed into someone white.

The author explores how the probability for passing varied throughout the Spanish Empire, and how it narrowed as the eighteenth century drew to a close. She also demonstrates that the inability to conceptualize passing beyond the scope of the individual exacerbated social tensions prior to independence.

"Beautifully written, capaciously documented, and compellingly argued, this book contributes enormously to the colonial Spanish-American historiography on race, social status, and culture, as well as on how these themes were played out in daily life as concerns for honor, gender, and sexuality."—Ramón Gutierrez, University of California, San Diego

"Fresh, well written, thoroughly documented, and extraordinarily informative, this outstanding social history is one of the most important works in colonial Spanish American history published in the 1990s."—Choice

"Twinam's book reflects mature scholarship developed over several decades of research and reflection . . . and is a good example of how social history can be done. . . . She has produced a book that illuminates very important aspects of Spanish American social history and late-18th-century Bourbon policy."—Journal of Social History

"Twinam has carefully reconstructed the world of the local elite, while providing a nuanced and detailed analysis of the social and economic costs of illegitimacy."—Colonial Latin American Review

Ann Twinam is Professor of History at the University of Cincinnati.
Loading...
or support indie stores by buying on