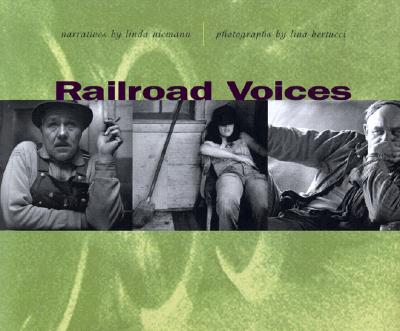 An evocative and honest portrayal in words and images of railroad life in America, "Railroad Voices" is a collaboration by two of the first women to work as railroad brakemen. Linda Niemann hired on the Southern Pacific in 1979 in California, where she continues to work as a conductor for the Union Pacific, and Lina Bertucci hired on the now-defunct Milwaukee Road in 1974.
The eighteen-year-old Lina Bertucci used her camera to hold her own in the freightyard, and the resulting fifty-eight photographs in this book present an insider's view of a world few people have access to. This is the true world of work: the face of exhaustion, of hours spent waiting, followed by intense activity, of the outside maze of tracks and house-size boxcars the workers shepherd with their bodies and a two-dollar lantern. We notice what individuals these people arethe clothes they choose to wear, their tattoos, their faces. And they are, of course, looking at Lina, or aware of her presence in their previously all-male sanctuary.
Linda Niemann's folkloric memoirs give this environment voice. The railroad for her has become an eighteen-year career and her poetic subject. As the last brakeman hired, Niemann has had to follow the work all over the Southwest, collecting travelers tales along the way. Her stories carry the images forward in time to the present-day railroad of short crews, no cabooses, and streamlined, downsized operations. She tells the human stories these changes generate, while delighting in the language and details of the craft. Image and text interplay to place the reader inside an exciting, changing, and dangerous world that has for generations been a major part of American culture.

This stunning book opens up the reader to the world of railroad work and workers like nothing else. It’s clearly a major literary work. The stories are beautifully written, eloquently capturing a rough and difficult world in an accessible and compelling voice. They are also one of the best sources on women’s efforts to cross over into nontraditional jobs, and on the impact on real working people of the 1980s and 1990s restructuring’ of the economy. The photographs mesh perfectly with the text. They manage, like the text, to depict a hard life without being voyeuristic, sensational, or romantic.” Dana Frank, University of California, Santa Cruz

Linda Niemann is a conductor for the Union Pacific Railroad. She has a Ph.D. in English literature from the University of California, Berkeley, and is the author of" Boomer: Railroad Memoirs. "Lina Bertucci is a photographer and a teacher of photography at the International Center of Photography, the New School, and New York University. She received a Master of Fine Arts at the Pratt Institute.
Loading...
or
Not Currently Available for Direct Purchase