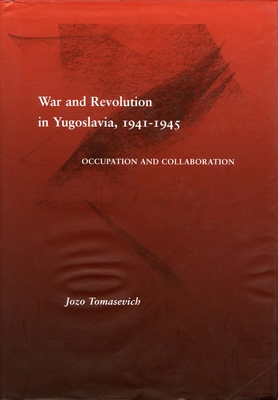 This is the long-awaited second part of the author's meticulously researched and scrupulously impartial study of the complicated and anguished history of Yugoslavia during the years of World War II. The previous volume dealt with the Chetniks, the resistance movement formed by officers of the defeated Yugoslav army who came to regard the Communist-led Partisans as their chief enemy, and who reached accords with the occupying powers--first with the Italians and then with the Germans. The present volume deals with the rule of the Axis powers in occupied Yugoslavia, along with the role of the other groups that collaborated with them--primarily the extremist Croatian nationalist organization known as the Ustashas.

The book begins by briefly describing the establishment of Yugoslavia in 1918 and its internal history during the interwar period. It then discusses the breakup of the state in April 1941, the annexation or occupation of parts of its territory by its neighbors, and the establishment by the Ustashas of the independent state of Croatia as a German-Italian quasi protectorate, focusing on its governmental policies and its problems with the Bosnian Muslims. The book also examines the role of religion during the occupation, the destruction of the Yugoslav Jewish community, and the economic exploitation of Yugoslav territory by the Axis powers. The work concludes by discussing the wartime population losses of the country and the ultimate fate of the collaborationist forces.


Praise For War and Revolution in Yugoslavia, 1941-1945: Occupation and Collaboration…

This is a magnificent work of superb scholarship. No other book in any language so clearly presents and analyzes the aims and policies of the Axis in occupied Yugoslavia, as well as those of the various collaborators. . . . The need for such a book is greater than ever, as controversies over the past rage in the post-Yugoslav states.”Ivo Banac, Yale University

There is plenty of significance in this truly monumental work of scholarship. Tomasevich’s exhaustive mining of German and Italian government documents opens a fascinating window on the wartime exploitation of Yugoslavia’s economic and human resources.”Choice

The present work is the long-awaited sequel to [Tomasevich’s] equally monumental War and Revolution in Yugoslavia, 1941-1945: The Chetniks. . . . War and Revolution in Yugoslavia, 1941-1945: Occupation and Collaboration aims at an academic audience, but it would be valuable to anyone interested in understanding the Yugoslav past and present. It is a must for any college library and desirable for larger public ones.”History: Reviews of New Books

All the distinguishing features Tomasevich showed in writing the first volume are also expressed in this book, which describes how the occupying forces ruled some parts of Yugoslavia, and how their collaborators adapted under such circumstances. . . . This book, together with its predecessor, is an invaluable foundation that no new research into World War II on the territory of former Yugoslavia will be able to bypass. It promises to remain for a long time to come.”American Historical Review

War and Revolution in Yugoslaia, 1941-1945 will almost certainly be considered the definitive work on the . . . .controversial topic of occupation and collaboration regimes in wartime Yugoslavia . . . .Tomasevich covered in meticulous and awe-inspiring detail the activities and experiences of those parts of Yugoslavia occupied by or in active collaboration with the various axis regimes during te Second World War . . . .What Tomasevich has done is certainly deserving of our highest praise. This volume, like his first, is an indispensable addition in the library of every serious scholar of Yugoslavia or the Second World War.”Canadian Slavonic Papers

The late Jozo Tomasevich was Professor Emeritus of Economics at San Francisco State University. He was the author of War and Revolution in Yugoslavia, 1941-1945: The Chetniks (Stanford, 1975) and Peasants, Politics, and Economic Change in Yugoslavia (Stanford, 1955)
Loading...
or support indie stores by buying on