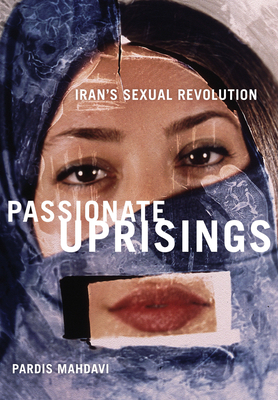 There is perhaps no place in the world today where the stakes of partying and having sex are higher than in present-day Iran. Drinking and dancing can lead to arrest by the morality police and a punishment of up to 70 lashes. Consequences for sex outside of marriage can be even more severe--up to 84 lashes, or even public execution.

But even under the threat of such harsh punishment, a sexual revolution is taking place. Iranian youth continually risk personal safety to meet friends, date, and, ultimately, to have sex. In the absence of any option for overt political dissent, young people have become part of a self-proclaimed revolution in which they are using their bodies to make social and political statements. Sex has become both a source of freedom and an act of political rebellion.

With unprecedented access inside turn-of-the century Iran, Pardis Mahdavi offers a firsthand look at the daily lives of Iranian youth. They are given a voice as she tells the stories of their intertwined quests for sexual freedom, political reform, and a better future--but not a future without risk. The sexual revolution is also leading to increased levels of abortion, HIV/AIDS, sexually transmitted diseases, and ongoing emotional troubles and mental illnesses, with worrying implications for Iranian youth and Iranian society at large.

Passionate Uprisings is a fascinating, ground-breaking, and personal look into a society that is poorly understood--if it is understood at all--by the majority of Westerners today. Mahdavi's narrative provides not only an invaluable insight into the real lives of much of Iran's population, but shows how sexual politics and the youth culture could even destabilize the current regime and change the course of Iranian politics.

Pardis Mahdavi is Assistant Professor of Anthropology at Pomona College and a consultant for the International Women's Health Coalition. She previously was editor-in-chief for Slant Magazine, as well as a consultant for the United Nations Population Fund, and has written for the Los Angeles Times Magazine. As part of her research for this book, Mahdavi visited Iran over a period of seven years, starting in 2000.

"Part academic treatise, part titillation, Mahdavi's work argues that the social and sexual practices of the urban young adults 'who comprise two-thirds of Iran's population' constitute a form of political dissent and rebellion. While the punishments for premarital sex, drinking and dancing are severe, the author, a journalist and assistant professor of anthropology at Pomona College, captures a hedonistic, postadolescent and pure pop culture spirit, reflecting the interests and activities of the 'highly mobile, highly educated... underemployed' and secular young Tehranis she followed over a seven-year period." —Publishers Weekly

"Passionate Uprisings carves a clear trail through the jungle of ideology about life in modern-day Iran, and breaks new ground to show how sex is used by young people in a Muslim country to resist political oppression. A fascinating book unlike any other." —Sally Guttmacher, New York University