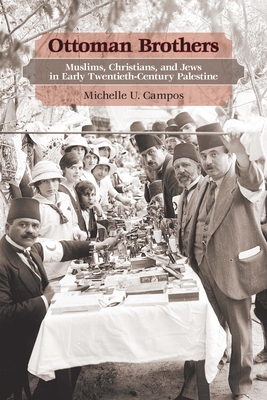 In its last decade, the Ottoman Empire underwent a period of dynamic reform, and the 1908 revolution transformed the empire's 20 million subjects into citizens overnight. Questions quickly emerged about what it meant to be Ottoman, what bound the empire together, what role religion and ethnicity would play in politics, and what liberty, reform, and enfranchisement would look like.

Ottoman Brothers explores the development of Ottoman collective identity, tracing how Muslims, Christians, and Jews became imperial citizens together. In Palestine, even against the backdrop of the emergence of the Zionist movement and Arab nationalism, Jews and Arabs cooperated in local development and local institutions as they embraced imperial citizenship. As Michelle Campos reveals, the Arab-Jewish conflict in Palestine was not immanent, but rather it erupted in tension with the promises and shortcomings of civic Ottomanism.

"It is impossible to do justice to the complexity of the author's arguments or to the astonishing material that she has meticulously mined and superbly analyzed. Campos' study complicates and enriches our understanding of the late Ottoman Empire, including Palestine, and as such represents an original and exceedingly readable contribution to the field."—Najwa al-Qattan, Journal of Palestine Studies

"Ottoman Brothers contains a detailed examination of the closing years of the Ottoman Empire. . . Campos does a fine job of describing the forms of cooperation that developed between the adherents of the different religions."—Lary Poston, Missiology

"Rarely does a book's cover capture so well its contents and arguments as does the photograph on Michelle Campos's excellent book &lt;I&gt;Ottoman Brothers: Muslims, Christians and Jews in Early Twentieth-Century Palestine&lt;/i&gt;. &lt;Ottoman Brothers&lt;I&gt; is engaging and clearly written. . . It is an innovative, original study of the late Ottoman Empire (and Palestine) and its confessional and inter-communal nature, which also contributes to a greater understanding of the citizenship discourse and its competing ideologies in multi-ethnic and multi-national settings."—Abigail Jacobson, &lt;I&gt;Journal of Levantine Studies&lt;/i&gt;

"As Western observers currently rush to describe the Arab Spring as an unprecedented experiment in popular participatory politics, Michelle Campos has provided a timely reminder that Middle Easterners are no strangers to the concepts of civic engagement and representative democracy . . . [Ottoman Brothers] should be applauded as a bold attempt to revive an overlooked period of Palestine's history."—Jacob Norris, Historical Journal

"Ottoman Brothers offers a startling new insight into a globally important case: for a brief period in the not-so-distant past, Palestine was consumed by civic activism and democratic co-existence, and was not necessarily headed toward inevitable conflict. Campos delivers a wonderfully rich contribution to the study of the modern Middle East."—Charles Kurzman, University of North Carolina

Michelle U. Campos is Assistant Professor of the History of the Modern Middle East at the University of Florida.
Loading...
or support indie stores by buying on