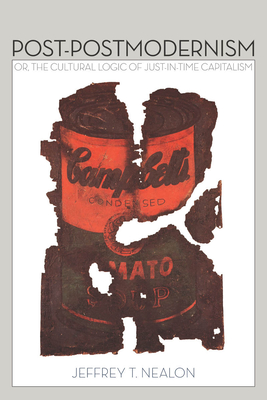 Or, the Cultural Logic of Just-In-Time Capitalism

Post-Postmodernism begins with a simple premise: we no longer live in the world of "postmodernism," famously dubbed "the cultural logic of late capitalism" by Fredric Jameson in 1984. Far from charting any simple move "beyond" postmodernism since the 1980s, though, this book argues that we've experienced an intensification of postmodern capitalism over the past decades, an increasing saturation of the economic sphere into formerly independent segments of everyday cultural life. If "fragmentation" was the preferred watchword of postmodern America, "intensification" is the dominant cultural logic of our contemporary era. Post-Postmodernism surveys a wide variety of cultural texts in pursuing its analyses--everything from the classic rock of Black Sabbath to the post-Marxism of Antonio Negri, from considerations of the corporate university to the fare at the cineplex, from reading experimental literature to gambling in Las Vegas, from Badiou to the undergraduate classroom. Insofar as cultural realms of all kinds have increasingly been overcoded by the languages and practices of economics, Nealon aims to construct a genealogy of the American present, and to build a vocabulary for understanding the relations between economic production and cultural production today--when American-style capitalism, despite its recent battering, seems nowhere near the point of obsolescence. Post-postmodern capitalism is seldom late but always just in time. As such, it requires an updated conceptual vocabulary for diagnosing and responding to our changed situation.

Jeffrey T. Nealon is Liberal Arts Research Professor of English at Penn State University. He is the author of Double Reading: Postmodernism after Deconstruction (1993), Alterity Politics: Ethics and Performative Subjectivity (1998), The Theory Toolbox (2003), and Foucault Beyond Foucault: Power and Its Intensifications since 1984 (Stanford, 2008).

Praise For Post-Postmodernism: Or, the Cultural Logic of Just-In-Time Capitalism…

"This is a work of very considerable importance. Now perhaps more than at any other time, culture and the economy constitute a seamless whole: everything can be given its price. Nealon poses the question: if postmodernism was the cultural logic of late capitalism, what is the cultural logic that has accompanied our current regime of accumulation? His answer is novel and ingenious."—Kenneth Surin, Duke University