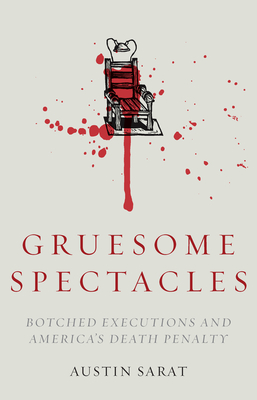 Gruesome Spectacles tells the sobering history of botched, mismanaged, and painful executions in the U.S. from 1890 to the present. Since the book's initial publication in 2014, the cruel and unusual executions of a number of people on death row, including Clayton Lockett in Oklahoma and Joseph Wood in Arizona, have made headlines and renewed vigorous debate surrounding the death penalty in America. Austin Sarat's book instantly became an essential resource for citizens, scholars, and lawmakers interested in capital punishment--even the Supreme Court, which cited the book in its recent opinion, Glossip v. Gross.

Now in paperback, the book includes a new preface outlining the latest twists and turns in the death penalty debate, including the recent galvanization of citizens and leaders alike as recent botched executions have unfolded in the press. Sarat argues that unlike in the past, today's botched executions seem less like inexplicable mishaps and more like the latest symptoms of a death penalty machinery in disarray. Gruesome Spectacles traces the historical evolution of methods of execution, from hanging or firing squad to electrocution to gas and lethal injection. Even though each of these technologies was developed to perfect state killing by decreasing the chance of a cruel death, an estimated three percent of all American executions went awry in one way or another. Sarat recounts the gripping and truly gruesome stories of some of these deaths--stories obscured by history and to some extent, the popular press.

Austin Sarat is the William Nelson Cromwell Professor of Jurisprudence and Political Science at Amherst College. Sarat has written for numerous academic and trade publications, and his books include: When the State Kills (2001), Mercy on Trial (2005) and Re-imagining To Kill a Mockingbird (2013).
Loading...
or support indie stores by buying on