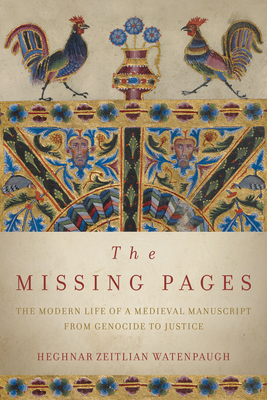 The Modern Life of a Medieval Manuscript, from Genocide to Justice

In 2010, the world's wealthiest art institution, the J. Paul Getty Museum, found itself confronted by a century-old genocide. The Armenian Church was suing for the return of eight pages from the Zeytun Gospels, a manuscript illuminated by the greatest medieval Armenian artist, Toros Roslin. Protected for centuries in a remote church, the holy manuscript had followed the waves of displaced people exterminated during the Armenian genocide. Passed from hand to hand, caught in the confusion and brutality of the First World War, it was cleaved in two. Decades later, the manuscript found its way to the Republic of Armenia, while its missing eight pages came to the Getty.

The Missing Pages is the biography of a manuscript that is at once art, sacred object, and cultural heritage. Its tale mirrors the story of its scattered community as Armenians have struggled to redefine themselves after genocide and in the absence of a homeland. Heghnar Zeitlian Watenpaugh follows in the manuscript's footsteps through seven centuries, from medieval Armenia to the killing fields of 1915 Anatolia, the refugee camps of Aleppo, Ellis Island, and Soviet Armenia and ultimately to a Los Angeles courtroom.

Reconstructing the path of the pages, Watenpaugh uncovers the rich tapestry of an extraordinary artwork and the people touched by it. At once a story of genocide and survival, of unimaginable loss and resilience, The Missing Pages captures the human costs of war and persuasively makes the case for a human right to art.

Heghnar Zeitlian Watenpaugh is Professor of Art History at the University of California, Davis. She is the award-winning author of The Image of an Ottoman City: Architecture in Aleppo (2004). Her writing has also appeared in the Huffington Post and the Los Angeles Times.

2. How does the separation of the Canon Tables from its mother manuscript, the Zeytun Gospels, mirror or symbolize the history of the Armenian people?

3. The lawsuit against the J. Paul Getty Museum incited a dispute on who has rightful ownership to the Canon Tables, which have tremendous artistic and historical importance. What are your thoughts on which group should own the Canon Tables? Can you think of other examples in history that have spurred discussion on the issue of rightful ownership?

4. Material objects can hold cultural and religious importance to its owners, especially for survivors of war and genocide. Do you or your family have any significant objects that would be difficult to part with if they were lost, stolen, or destroyed?

5. The author tells the biography of the Zeytun Gospels via its global travels throughout history. Which geographical stop of the manuscript’s journey did you find the most intriguing, and why?

6. Discuss the importance of the lawsuit taking place in Los Angeles, and the response of the Armenian community to the settlement.

7. How will the five-year-long lawsuit involving the Canon Tables, and the settlement reached by both parties, help shape the history of the Armenian genocide?

8. Exhibitions at renowned art museums like the Getty Museum tell innovative stories about its objects on display, communicating scholarly research to the public. Has reading The Missing Pages influenced the way you will observe art and historical objects at museums in the future?